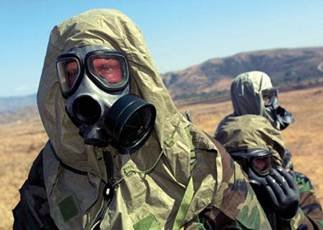 Doctors in Hazmat suits Courtesy of the Global Information Network

Mar. 25 (GIN) – The deadly Ebola virus, once limited to central and east Africa, has erupted in the West African nation of Guinea. The latest official statistics put the toll at 86 suspected cases and 59 deaths.

“This is a rare disease,” cautioned Dr. Esther Sterk, tropical medicine advisor to Doctors Without Borders. “Epidemics are limited, but they create panic every time because Ebola is fatal in 25 to 90 percent of cases.

Sterk continued: “After an incubation period of 2 to 21 days, the virus causes a raging fever, headaches, muscle pain, conjunctivitis and general weakness… The virus spreads in the blood and paralyzes the immune system. It is particularly formidable because the body does not detect these viruses right away. When the organism does respond, it is often too late.”

"We are overwhelmed in the field, we are fighting against this epidemic with all the means we have at our disposal with the help of our partners”, said Sakoba Keita, Guinea’s chief disease prevention officer. “It is difficult but we will get there."

Ebola was discovered in 1976 and the closely-related Marburg virus in 1967. Since then, more than 2,300 cases and 1,670 deaths have been reported. While alarming, these numbers pale in comparison to the mortality rate from malnutrition or other infectious diseases in Africa such as malaria, cholera, AIDS, dengue or tuberculosis.

Because of its lethal potential, Ebola has been studied as a Category 1 “biowarfare agent” both in the former Soviet Union and in the U.S. under the Defense Dept’s Transformation Medical Technologies initiative. Funding into research for a treatment was increased in the US after the September 11th attacks in 2001. A possible treatment is being developed jointly by the US Army Medical Research Institute of Infectious Diseases and private company Serepta Therapeutics.

Meanwhile, United Nations officials are reporting that the virus has spread to the capital, a port city of up to two million, from remote forests in the south. The government has sent out text messages, urging people to stay calm and wash their hands with soap.

Guinea is also currently grappling with epidemics of measles, cholera and meningitis.

Neighboring countries such as Liberia, Senegal and Sierra Leone are said to be on high alert in case the disease spreads. Five people are already reported to have died in Liberia after crossing from southern Guinea for treatment, Liberia's Health Minister Walter Gwenigale told journalists.

However, it is not certain if they had Ebola.