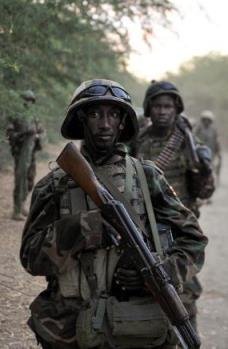 Mar. 25 (GIN) – As Kenyans grieve for the victims of a shocking attack on a Sunday church service in the city of Likoni, Mombasa, plans are afoot to raise the stakes of war in neighboring Somalia.

Six people died in the attack including the mother of an 18 month old boy who shielded the child with her body.

Police have linked the shootings by at least two gunmen to the Somali Al-Shabab group. The attackers escaped on foot before the police arrived.

Speaking to worried citizens in Mombasa, U.S. Ambassador to Kenya Robert Godec pledged U.S. support to protect and secure Kenya’s porous borders in the fight against terror. He called al-Shabab a serious security threat to the Kenyan people. “We have an obligation to stand with Kenya and our commitment is to help overcome the challenge,” he said.

The U.S. has been quietly adding to its already sizeable presence on the continent, most recently with the transfer of 150 special forces personnel and four Osprey Tilt-rotor aircraft to Uganda to assist in the search for Joseph Kony, a reputed Ugandan warlord. Some sources say Kony has decamped to the Central African Republic where his senior commander was captured two years ago.

The U.S. forces will “provide information, advice and assistance” to African Union troops searching for Kony across central Africa. They’re not allowed to engage Kony’s forces unless in self-defense.

Training is also being provided by U.S. Marines from the Special-Purpose Marine Air-Ground Task Force to the Burundi National Defense Force in preparation for deployments to Somalia.

Meanwhile, fighting between Kenya and Somalia continues to heat up. Kenya's military says it bombed on an Islamist camp in Somalia in January, killing 30 militants, including al-Shabab commanders.

Local residents say there was lots of destruction.

Over a million Somalis live in Kenya, having fled the instability in their country. This week in a surprise move, Kenya ordered all Somali refugees in urban areas to return to refugee camps on the border in a bid to end attacks by Islamist militants retaliating for Kenya’s intervention in Somalia.

The move is likely to be criticized by rights groups which have discouraged similar actions in the past.

Until now, refugees who could support themselves or were in need of specialized education or medical care had been allowed to live in urban areas.