Ups and downs for NY-NJ teams in postseason play 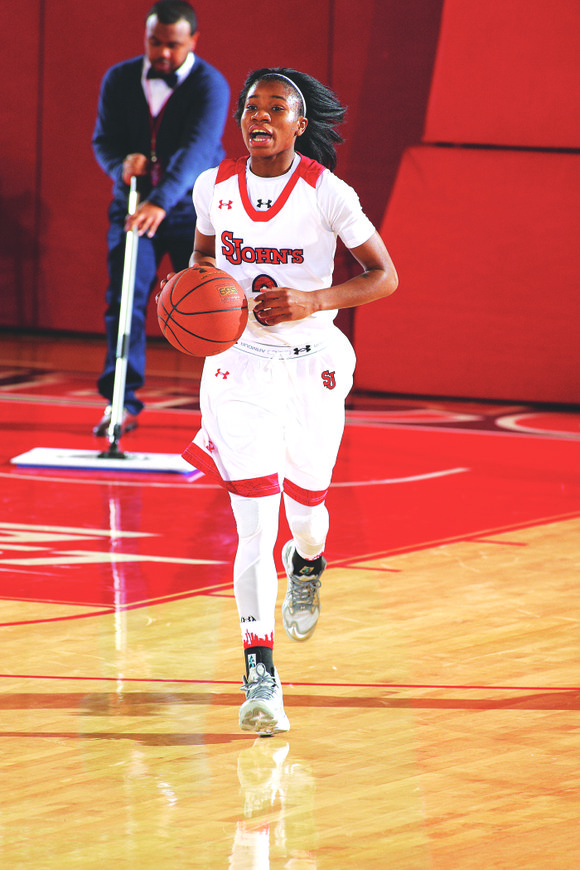 Aliya Handford has been a key factor in St. John’s 24 rise to the NCAA Tournament. Photo Courtesy St. John’s University

St. John’s guard Aliyyah Handford scored 27 points to keep the game alive, but the Red Storm’s first-round victory in the NCAA Tournament came down to Briana Brown’s 3-pointer with less than a second left on the clock. Behind most of the game and with several players in foul trouble, St. John’s pulled out a 71-68 win over USC.

It was a one-point loss for the Fordham Rams, who dropped a 64-63 heart breaker to California. After an early lead, Army fell to Maryland 90-52 in the first round. Marist also made a first-round exit from the tournament, losing to Iowa 87-65.

In round two of the tournament, St. John’s put up a good fight, but the team overpowered by Tennessee 67-51.

In WNIT play, there’s an update to last week’s article. There were actually five teams from the New York-New Jersey area playing—Rutgers is also taking part.

It was a one-point loss for Iona, which went down 90-89 to Harvard. Stony Brook fell hard to Michigan in the first round, 86-48. That ended the season for the two New York teams participating in postseason WNIT action.

In what looks to become an excellent in-state rivalry in the years ahead, Seton Hall defeated Princeton 75-74 to head into the third round of WNIT play. A successful run in the WNIT is a perfect conclusion to Anthony Bozzella’s first year as the Pirates’ head coach.

“We had great atmospheres at our two games here—loud, great crowds,” said Bozzella, a graduate of Seton Hall who is intent on building a winning program. “At the game against Princeton, we had our band, they had their band. … When you win some playoff games and you do it in front of great crowds, that changes everything.”

Next, Seton Hall will play another New Jersey rival, Rutgers—the 63-52 winner over Harvard—tonight at Rutgers.