Art of Chinese calligraphy at the Met 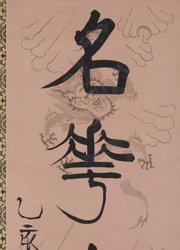 At the Metropolitan Museum of Art, explore “Out of Character: Decoding Chinese Calligraphy in the Galleries for Chinese Paintings and Calligraphy.” It’s a major exhibit that includes masterpieces by some of the most renowned practitioners in Chinese history. Made up of more than 40 works of calligraphy, the exhibition features selections from the collection of Akiko Yamazaki and Jerry Yang (co-founder of Yahoo!) and introduces viewers to the visual art forms of the written word that was prized in traditional China.

On view, there are personal letters that were written in calligraphy and mailed in the collection. Styles vary throughout the years; in the 15th century, calligraphy was penned large and powerful, while in the 16th century, it was more balanced and quite elegant.

“For me, understanding and appreciating Chinese calligraphy has been a journey of discovery, inspiration and fulfillment,” said Yang in the exhibition’s catalogue.

The magnificent selection is intended to speak to beginners and specialists alike, using artwork of the highest quality to introduce key concepts of format, script type and style. One of the highlights of the exhibition is the 16th century album by Weng Peng (1497-1573) called “The Thousand Character Classic,” consisting of 85 leaves. It actually fills a 25-foot-long wall.

Some of the most notable works on view will include a standard script transcription of the Buddhist text the “Lotus Sutra” (“Miaofa lianhua jing”) by Zhao Mengfu (1254-1322); a scroll of poems written in powerful cursive script by Xiong Tingbi (1569-1625), a Ming general charged with defending the Great Wall; and a cluster of works by 17th century Ming loyalists.

An important group of 19th century pieces is by the masters of the “Epigraphic School” who based their calligraphy on the archaic scripts found on bronze vessels and monumental stone steles. The exhibition will be on view at the Met from now until August 17. It will also be on view at the museum’s website at www.metmuseum.org.