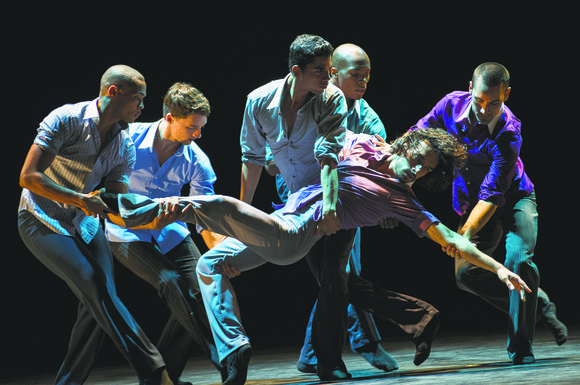 In his fourth year as artistic director of Ballet Hispanico, the brand that Cuban-American Eduardo Vilaro—who succeeds founder Tina Ramirez after nearly 40 years of leadership—sports is becoming more and more sound. Vilaro’s trajectory has been similarly sound since he took the reins; he boasts a list of named Latino choreographers and an impressive lineup of works. Similarly impressive, this year in particular, is the strong cast of dancers.

Ballet Hispanico will be appearing at the Joyce Theater April 15-27. Program A includes Mexican-born Edgar Zendejas’ “Umbral” (2013), Belgo-Colombian Annabelle Lopez Ochoa’s “Sombrerisimo” (2013) and the world premiere of “El Beso” by Spanish-born Gustavo Ramirez Sansano. Zendejas takes his inspiration from the Mexican celebration Dia de los Muertos (Day of the Dead) for “Umbral,” and there is light comedy in Ochoa’s athletic “Sombrerisimo” and even more laughs in Sansano’s “El Beso,” but what holds the evening is the beautiful dancing. Min-Tzu Li and Christopher Bloom’s duet in “Umbral” is exquisite; they seamlessly transition from one difficult lift to another with intimate moments in between.

The comedy in “Sombrerisimo” shows whenever the men are playful and commanding, navigating brotherhood and using traditional movements (quick bits of salsa with a fake female partner) and a barrage of flips and balances, and in “El Beso,” where there is a lot of kissing.

In yet another duet, Bloom shines with Jamal Rashann Callender in “El Beso,” showing intimacy and skill.

It’s well worth seeing Ballet Hispanico this season for the dancing and the growing repertory. Rounding out the season is “Hogar” by Vilaro to live music, Edwaard Liang’s “A Verme,” Spanish-born Nacho Duato’s “Jardi Tancat” (1983), Ochoa’s “Mad’moiselle” (2010) and “Asuka” (2011) by Vilaro. For more information, visit www.joyce.org.