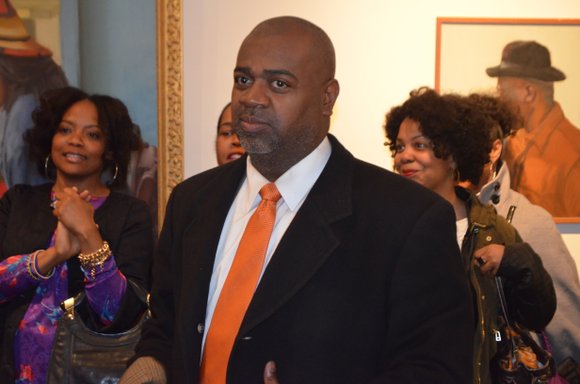 With less than two weeks remaining in the mayoral race for Newark, N.J., candidate Ras Baraka took time out from the campaign trail to attend a fundraiser in Brooklyn on Saturday.

A group of Brooklynites in support of Baraka for mayor gathered at Danny Simmons’ Corridor Gallery in Clinton Hill. The event was hosted by artists and poets, who greeted the councilman and also paid tribute to the enduring legacy of his father, author, playwright and activist Imanu Amiri Baraka.

“I have known Ras Baraka since his days as a poet,” artist, author and philanthropist Simmons told the AmNews. “I know the content of his heart. He is really the type of person Newark needs, a compassionate political leader. He knows the needs of the community at large.” Simmons also noted that artists are viable sources that politicians can use for support.

“Just because Ras Baraka doesn’t represent our district doesn’t mean that we shouldn’t support him,” said Simmons. “We need leaders throughout the political landscape. When we can help get people elected that are passionate about the arts and community, we should help.”

After some entertainment, the guest of honor engaged the audience in some social discourse, which included a discussion on the impact the late Chokwe Lumumba, the former mayor of Jackson, Miss., had on Black America. He also shared some of his experiences in the political arena and his vision for Newark.

“We need to begin to develop our neighborhoods and finish development in the downtown area,” said Baraka. “We need to find a way to fight poverty without throwing the people out of the neighborhood. We have to improve education without closing schools. We have to take care of the people. If you build the people up, then they will build the city up.” 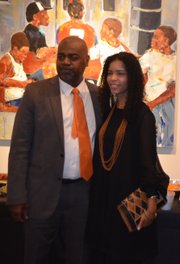 Baraka said that as mayor, he would revitalize the Newark economy by generating income from the Port of Newark and the airport. That would provide more jobs for the people in Newark, which would reduce crime.

Baraka is facing former Assistant Attorney General Shavar Jeffries in the May 13 city election. Polling data released this week suggests that Baraka is the favorite to become Newark’s mayor, even though Jeffries continues to outpace Baraka in fundraising.

“I think we are creating a momentum that we need despite all the money being spent and lies that are being told against my campaign,” Baraka told the AmNews. “We are going to move forward, and we are going to win.”