‘Ending gun violence starts with you!’ 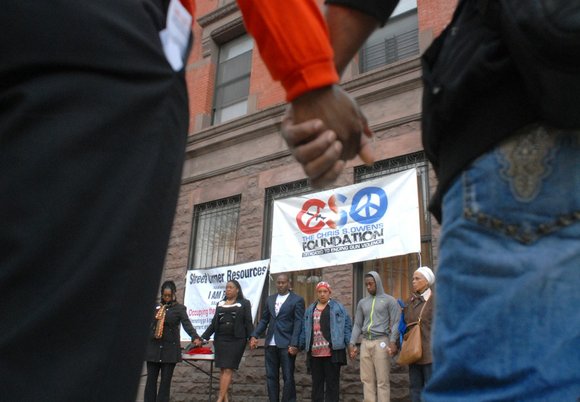 It has become an annual tribute and call for justice. On Saturday, April 26, a determined collection of anti-gun violence activists, parents, concerned residents and some law enforcement officers gathered on Harlem’s Lennox Avenue to mark the five-year anniversary of the shooting death of 13-year-old Chris Shakim Owens.

“The Chris S. Owens Foundation gives thanks to everyone who came out to Harlem to support and honor the life of Chris S. Owens, and raise awareness of catching a child-killer,” Chris’ father, Chris Foye, told the Amsterdam News.

Foye added that the NYPD is offering $12,000 for information leading to the arrest of the person responsible for the death of the teen, who was caught in the crossfire during a shooting at a Lenox Avenue barbecue. He was fatally wounded by the indiscriminate gunfire, which also hit two other people. Their injuries were not life-threatening, but the bullet left Chris brain-dead, and after some time on life support, the popular eighth-grader at the Action for Community Empowerment School was removed from life support.

“Somebody knows who killed my son,” said Foye. “I’d like the killer of my son to turn themselves in. It has got to be killing them knowing that they killed a child. They should know they did something wrong.

“I would like him to pay for the mistake that he made. I have to say it again though: Stuff happens when you don’t follow curfew; my son stayed out past his curfew. He was told to come home, but he didn’t. This was the outcome. It cost him his life. He was just 13. I don’t want any other parent to go through what me and his mother have been going through. Turn yourself in. Stop the violence.”