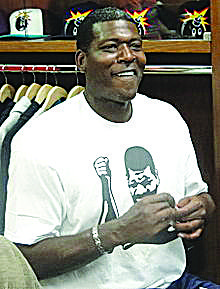 Charles Barron will be joined by former NFL star Walter Beach of the Cleveland Browns in a presentation entitled “Jump Ball: Blacks Rising Up to Fight for Power, Ownership and Self-Determination in Sports” on Thursday, May 1 at Sistas’ Place, located at 456 Nostrand Ave. at the corner of Jefferson Avenue, in Brooklyn at 6:30 p.m. A special message of unity written by Black Power Olympian John Carlos will be read. For more information, call 718-398-1766.

“Black people, you are focusing on the wrong thing. We should be focusing on having our own—own team, own league. Do for self!” – Knick great Larry Johnson

The firestorm surrounding the racist remarks of L.A. Clippers owner Donald Sterling doesn’t address the deeply rooted, systemic, institutional and structural racism in the National Basketball Association (NBA). NBA Commissioner Adam Silver banned Sterling for life, fined him $2.5 million and is planning to force him to sell the Clippers.

This does not take away from the fact that the NBA still remains a plantation for Black players who are owned by rich white males who benefit from the wealth Black players generate and can trade them at will. On Aug. 3, 1949, 11 white owners of professional basketball teams joined together to found the NBA. In that same year, the Black-owned Harlem Rens submitted an application to join the NBA and were denied because of race. Today, there are 30 NBA teams, and 29 are majority white-owned, while only one is majority Black-owned by Michael Jordan of the Charlotte Bobcats. Silver mentioned other Blacks who are owners, but they own an extremely small percentage and lack any real power. They are not majority owners.

Bryant, James and Jordan make most of their money from outside endorsements, not from the NBA. I might add that former NBA Commissioner David Stern (a white man of course; the NBA has never had a Black commissioner) made a reported salary of $20 to $23 million in 2011 to 2012 and had a reported net worth of $135 million. The average NBA franchise is worth $634 million. Collectively, the 30 NBA teams are worth $19 billion. The total NBA gate receipts for the 2013 season was $1.3 billion. I haven’t even discussed the multibillion-dollar TV revenues. I think you get my point!

Just as it is in American society, it is also in sports. Black talent and labor has produced enormous wealth for white owners and they refuse to share it. William C. Rhoden’s book “40 Million Dollar Slaves” truly sets the record straight. It’s a must-read!

Former Knicks star Larry Johnson had it right in 1999 when he said he was a “rebellious slave” on the NBA plantation, and no amount of money he’s paid changes his slave status.