NBT honors Amiri Baraka with a production of ‘Dutchman’ 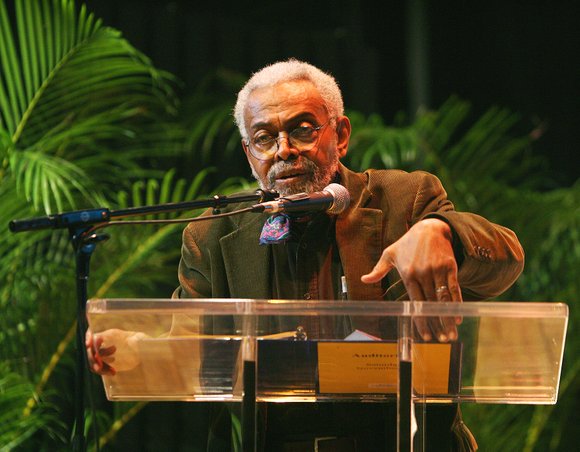 The National Black Theatre (NBT) and the Classical Theatre of Harlem come together to pay tribute to late author, playwright and activist Amiri Baraka with a production of his award-winning play “Dutchman.” Performances of the show, which is directed by Carl Cofield, will run May 3 through May 23 at the NBT, located at 2031 Fifth Ave. between 125th and 126th streets in Harlem.

The play represents the classic political allegory surrounding Black and white relationships during the time of the Black Arts Movement and the Black Power Movement that Baraka helped start in Harlem in the 1960s. This was Baraka’s last work as LeRoi Jones. The one-act play won an Obie Award for Best American Play in 1964 and went on to receive the Hollywood treatment in a 1967 a film starring the late Al Freeman Jr. and Shirley Knight.

The action focuses on Lula, a white woman, and Clay, a Black male, who ride the subway in New York City. Clay’s name symbolizes the impressionability of Black identity and Black manhood. Lula boards the train eating an apple, a Biblical allusion to Eve. The characters engage in a long, flirtatious conversation during the train ride.

“We are doing the text as it is. My goal is to spark a conversation about where we are now as a race, in regards to the time when the play was first written in the ’60s and now. I want the audience to think about how much has changed, what little has changed and what might the future entail,” Cofield told the AmNews. “In this production about dual existence, Clay is the protagonist. He is trying to make the best he can in the white world, but underneath all of this is a sort of rage, ultimately put in perspective in his last monologue. A lot of Black men can identify with Clay.”

Thomas said that what also drew him to the play was the overall objective of the main character Lula. “I wanted to investigate what Lula was looking for in a Black man. Her profile in the text clearly defines her as being attracted to Black men, but for what outcome? What did it really mean is what I wanted to explore.”

Cofield also gave thumbs up to his production team, who, he said, “did an incredible job!” The play features scenic design by Christopher Swader and Justin Swader, costume design by Rachel Dozier-Ezell, lighting design by Alan C. Edwards and sound design by Eric Sluyter.

Baraka was known for his poetry, drama, fiction, essays and music criticism. Throughout his life, Baraka had over 30 published works. He also appeared in more than 25 films. The cultural icon died in January at the age of 79.

“My father wrote so many essays and poems,” Ras Baraka, poet, politician and Baraka’s son, told the AmNews. “‘Dutchman’ speaks to a time period in America when he was moving into a more Black Nationalist mindset. He was moving from downtown to uptown. He was thinking about Black culture and things that were happening to Black people in this country for centuries.”

Ras Baraka said the play represented what his father had gone through as a child and as an adult and in his education at a time when he was figuring out who he was. “I think Clay represented a lot of that—Black people trying to realize what their relationship was with America and telling through it through the eyes of the people that hated them,” he added.

Tickets can be purchased online at www.nationalblacktheatre.org or by calling NBT directly at 212-722- 3800 or at NBT’s box office from 1 p.m. to 6 p.m. Tuesday through Saturday.