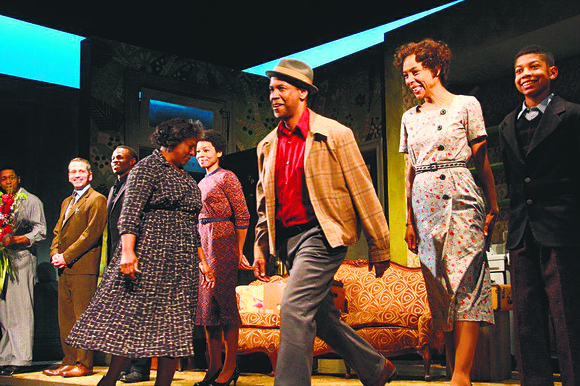 The 68th annual Tony Awards nominations were announced this week by SAG- and Emmy-nominated actress and star of “Elementary” (CBS) Lucy Liu and Jonathan Groff, the Tony-nominated star of HBO’s “Looking” and Disney’s “Frozen.” The award season showed few surprises but did underscore and highlight some well-deserved nominations.

To wit, “A Raisin in the Sun,” written by the late Lorraine Hansberry, first shook critics and audiences awake in 1959 with its Broadway opening, and it’s still making a statement on the Great White Way.

In 1960, the power of a dream deferred (taken from the poem “Harlem,” aka “A Dream Deferred,” by the great poet Langston Hughes) earned the first production four Tony Award nominations: Best Play, written by Hansberry and produced by Philip Rose and David J. Cogan; Best Actor in Play, Sidney Poitier; Best Actress in a Play, Claudia McNeil; and Best Direction of a Play, Lloyd Richards.

Today, the riveting and timeless story about a Black family’s experiences in the Washington Park Subdivision of Chicago’s Woodlawn neighborhood earned five nominations, including the coveted nod for Best Revival of a Play. The other impressive nominations went to La Tanya Richardson (Best Performance by an Actress in a Leading Role in a Play); Sophie Okonedo and Anika Noni Rose (Best Performance by an Actress in a Featured Role in a Play); and Kenny Leon (Best Direction of a Play).

The crowd-pleasing musical “After Midnight” was also honored with a nomination for Best Musical.

The Tony Awards will broadcast live from Radio City Music Hall on CBS on June 8, 8-11 p.m. For everything about the 68th annual Tony Awards, go to www.TonyAwards.com and follow them on Twitter @TheTonyAwards.