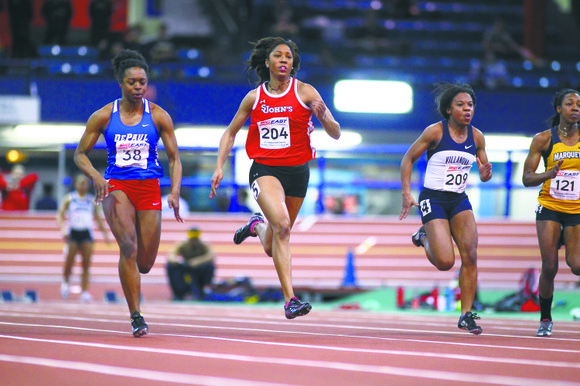 At each meet she attends during the outdoor season, St. John’s senior sprinter Corrine Williams is collecting memories, souvenirs and lots of photos. At last weekend’s Penn Relays, where she competed in the 4x100- and 4x200-meter relays, she got a hat and a Marines shirt. The Red Storm qualified for the ECAC finals in the 4x200, finishing seventh.

“It was bittersweet because I realized that was the last time I’d actually be competing at Penn Relays as a student-athlete. It was a good exit experience,” said Williams.

Williams, who grew up in Brooklyn and attended Bishop Ford Central High School, got into track because her mother had run track as a girl growing up in England. Williams and her older sister both started running at a young age.

“She got us into club track, and the rest is history,” Williams said. “I loved it so much, I wanted to make something out of it. It was my destiny. I’m really competitive.”

Being a student-athlete has given Williams Red Storm pride and a sense of discipline, which she wouldn’t change for the world. With only one more meet before the Big East championships, Williams is working hard in the hopes of earning a Big East title.

“Our training has been really good,” she said. “We went to some really hard meets—in Texas and Puerto Rico—to get some good times in. It showed things I need to work on to make sure my last outdoor Big East championship is successful.

“We have to work on a stick passing,” she added. “Once that’s down, we have enough talent and depth to make [NCAA] regionals in the 4x100 and hopefully in our individual events as well.”

A marketing major, Williams is hoping to work in sports marketing and event planning after graduation. After a lifetime in track, she may sample other sports in a noncompetitive way. At 5-foot-11, she has the height for volleyball and might give that or kickboxing a try.