Bibbidi Bobbidi Boo, and you’re a princess too 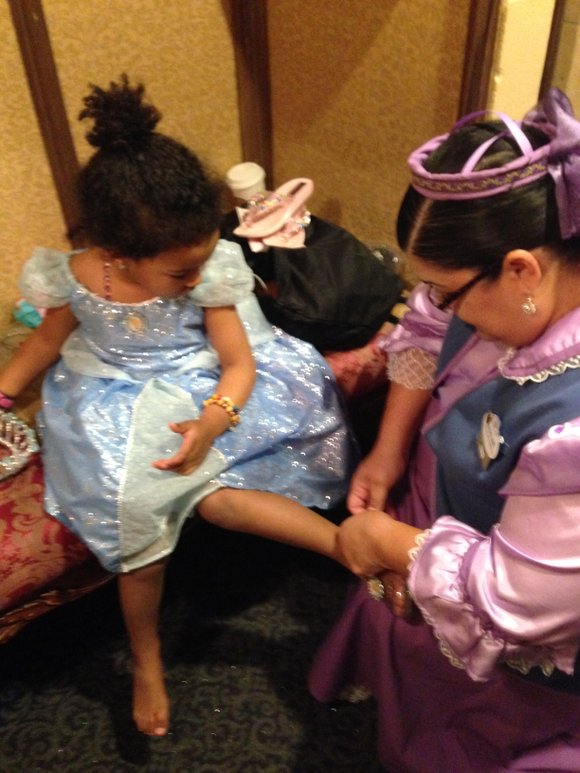 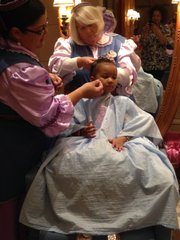 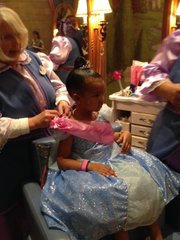 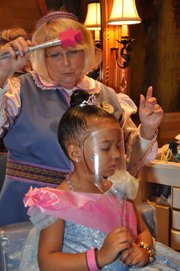 Almost every little girl wants to be a princess—whether it’s for Halloween, or just on a regular morning when she wakes up and wants to put a tiara on her head and don a dress with a full skirt adorned with glitter and rhinestones. It’s a part of growing up. It’s part of make-believe. It’s a part of what dreams are made of.

At Disney World, there are princesses everywhere. From the characters in the parks to the rides and experiences, you will find princesses at every turn. It used to be that your daughter would bring her favorite character’s costume to the parks and put it on and spend the day or the week dressed up as her favorite character. That was always fun. But now, Disney has taken that idea to another level with the Bibbidi Bobbidi Boutique, a full-service salon for the princess in training, a la Disney.

The experience starts when you and your child walk though the magical door in Cinderella’s castle. At that point, your little princess-to-be is greeted by her newly appointed fairy godmother, who helps her select which princess she would like to become. Every Disney princess is represented—from Tiana to Cinderella, Snow White to Ariel. You say the magic words and suddenly the transformation begins, from the dress to the shoes, the tiara, crown, wand and sash (as well as other add-ons).

After the little princess puts on her dress, she is escorted to her royal seat, where the rest of the transformation continues. Her fairy godmother then proceeds to fix the young princess’ hair, do her nails, apply age-appropriate makeup and, last but not least, add the magic fairy dust to complete the transformation.

After the hair and makeup are complete, the princess gets her wand, her sash and her goodie bag with her makeup and nail polish to take home. Then it’s off to the royal photo studio, where she poses for her royal portrait.

For some, this may seem like a waste of time, energy and money. But when you see the face of your little princess emerge from the palace, the feeling is priceless. The confidence, poise, joy and excitement is so beautiful to watch.

All around the park, the young ladies—excuse me, princesses—go about their park rounds, meeting the other princesses, going on rides and finally falling asleep fully clothed after a royal day of fun.

This experience is one your daughter will not soon forget. But remember: If you want to get an appointment at the boutique, reservations are necessary, as the slots become booked up months in advance. (You can book your appointments up to 180 days in advance.)

The Courtyard Package (starting at $94.95 plus tax)

So add a little extra magic to your next Disney visit and give your princess-in-training the royal treatment.