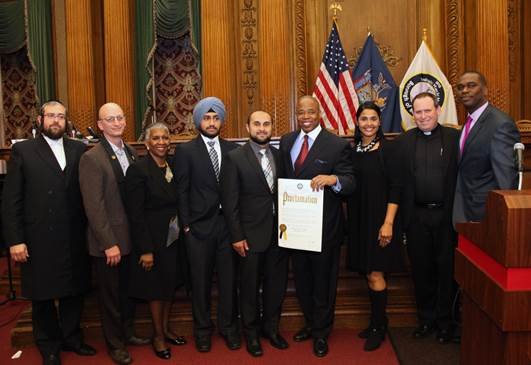 In keeping with the tradition of President Harry Truman, who signed a law in 1952 that established a National Day of Prayer, Brooklyn Borough President Eric Adams declared May 1 as Brooklyn Day of Prayer. The proclamation was made during a multi-faith celebration with local clergy leaders that he held in the courtroom of Brooklyn Borough Hall, where he also acknowledged the borough’s rich spiritual diversity.

“We are not human beings with spiritual experiences; we are spiritual beings with human experiences,” said Adams. “I want you all to be part of this experience in what we are about to do in Brooklyn. Many people are off-key out there, and we have to get them on the same tune in order to rebuild the borough, rebuild this city and, most importantly, rebuild our nation.”

The benediction was delivered by the Rev. Charles O. Galbreath of Clarendon Road Church. Breakfast served at the event was underwritten by Transport Workers Union Local 100.