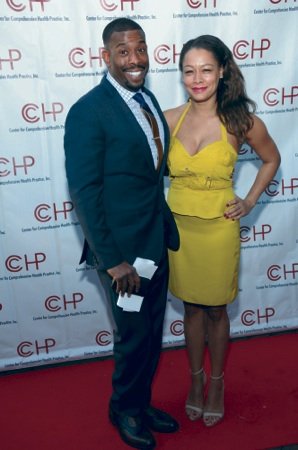 Guests poured into Central Park to enjoy live music, an outdoor cocktail reception and a seated dinner at the Loeb Boathouse with stunning views of the lake to attend the Center for Comprehensive Health Practice (CCHP) and Early Childhood Development Center (ECDC) annual gala. CCHP and ECDC are a nonprofit multidisciplinary community health center and substance abuse program located in East Harlem that is celebrating “40 years of building healthy families.” WABC-TV anchors Bill Ritter and Liz Cho, along with comic Chuck Nice, hosted the event, which raised $182,790 to support the ECDC program.

According to Richard Porter, CEO of CCHP, “The organization is committed to providing high quality comprehensive health care services for parents being able to care for their children. Our myriad of services are designed to help individuals sustain a lifelong healthy life.”

CCHP and ECDC assist parents in raising happy, healthy children who are loved regardless of what walks of life they come from. The gala was produced by Bee Season Consulting.

Happy birthday to Jaaaaames Brown, the “Godfather of Soul” and the hardest working man in show business, who would have turned 81 years old on May 3. Birthday wishes also to Artie Phillips, Sandra Carrion and Maria Tang.

Condolences to the family of Anthony “Tony” Drexel Duke (1918-2014). Duke, who was founder and president of Boys & Girls Harbor, died after a long battle with cancer. According to the family, Duke dedicated his career to educating children. The education and performing arts nonprofit was formed in 1937 as an outgrowth of a small summer camp for 12 inner-city boys. Over the years, the Harbor has served over 50,000 students and their families and continues this service for thousands of participants from Harlem and surrounding communities.

“Tony was more than just a figurehead. He developed personal relationships with the Harbor staff, students and alumni. He made sure that the Harbor served as a real home and learning environment for students. He was a true living legend,” said his family members.

I also want to extend my sympathies to Adrienne Moody, who recently lost his father.

Congratulations to the son of the late Judge Ted Jones, who recently got married. Dad, I’m sure, sends his blessings.

The Boys Club of New York hosted a wonderful dinner at the Mandarin Oriental hotel, where the young, gifted and talented Claudius Agrippa opened the evening by playing the national anthem on his violin. Meanwhile, Valentino Carlotti, the “it guy,” was honored, along with Ashley Schiff Ramos, at Jazz at Lincoln Center’s annual gala.

The 2014 annual gala “Love, Loss and Laughter: The Story of Jazz” concert and dinner featured Billy Crystal as its host and Jazz at Lincoln Center Orchestra with Wynton Marsalis.

Not to be outdone, the Metropolitan Opera held its annual dinner dance onstage at the Met—oh la la. In attendance were Kenneth and Kareitha Forde.

The National Dance Institute chose to hold its benefit at the Best Buy Theater, where Charles Riley captivated the audience with his hat, a la Pharrell Williams.

The Food, Allergy, Research and Education group held its 15th annual spring luncheon at Cipriani 42nd Street, and who was there to show their love and give their support? None other than ABC anchor Lori Stokes and philanthropist Malaak Compton Rock, Chris Rock’s wife.

Other celebrity sightings included Steve Buscemi at a benefit for the Wooster Group. The Wooster Group is a New York City-based experimental theater company known for creating numerous original dramatic works. Dinner was catered by chef Odette Fada. Buscemi is better known to me as Nucky Thompson from “Boardwalk Empire,” and I cannot wait for the new and final season to begin in September. After all, it’s as the saying goes—“You can’t be half a gangster.”

I know I told you about the Friends Committee of New Yorkers for Children’s 11th annual Spring Dinner Dance, but did I tell you that soul sisters Danielle and Lara Schriffen were in attendance and looking hot in their crop-top pants ensembles? Sometimes it hits me in the middle of the night when I am trying to recall if I’ve told you everything that maybe I missed an important item or two, and this may have been one of them. No worries for now, you know.

Please also know that New Yorkers for Children (NYFC) works in partnership with the Administration for Children’s Services to support the child welfare system by partnering with and engaging New Yorkers in that effort. Accordingly, the mission is to “focus on young people in foster care. NYFC supports programs that promote paths to stable adulthood through education and sustainable relationships with caring adults.” Should you want to make a contribution, you can do so by going to www.charitybuzz.com, where you will also find a host of good causes to donate to; just don’t go bananas.

I don’t know if it’s because everyone will soon be heading out of town for Memorial Day weekend—which means the summer season can’t be far behind—or because it’s spring, but old man winter has been put to bed, and everyone wants to be out and about, so it’s been gala after gala.  Sotheby’s was the venue for a black-tie dinner benefiting the Alzheimer’s Drug Discovery Foundation (ADDF). The ADDF was created in 1998 by Leonard and Ronald Lauder, sons of Estee Lauder.

Estee Lauder, who died in 2004 at age 97, built an empire, and everyone has at some point in their lives gotten a whiff of the Estee Lauder scent, of which there are many. For me, Youth Dew, her first scent, always takes on the body chemistry of whomever is wearing it, so you can never go wrong with that one. I love Beautiful, but you only need a dab, as it can be a bit heady.

Anyway, getting back to the boys, they have used their billions to support many great causes, one being the ADDF and the other being the Breast Cancer Research Foundation (BCRF). Most recently, the BCRF also had its annual Hot Pink Party luncheon, where they raised a record $5.4 million. Since its inception, the BCRF has raised well into the nine figures, with almost every dollar going to research.

It being Mother’s Day weekend, I think it’s most appropriate to say, thank you, Estee Lauder, for raising a family that is dedicated to doing so much for so many. That goes double for all of the mothers, mother figures, soon-to-be mothers and mothers at heart.

Until next week … kisses