New Yorkers rally for the return of kidnapped Nigerian girls 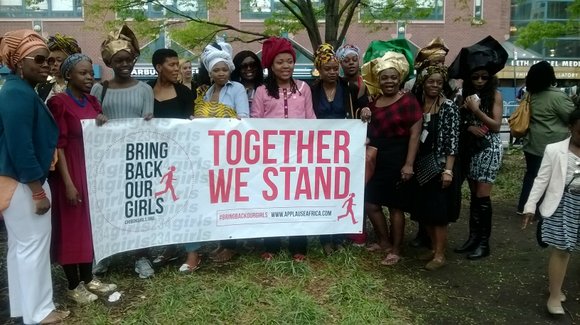 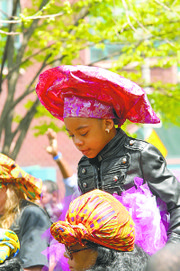 In Union Square last Saturday, May 3, hundreds of men, women and children took up the clarion call echoed in sister rallies in Philadelphia and Oakland, Calif. A rally for the legalization of marijuana on the other part of Union Square was loud, but it was no match for the moral landslide that was the “Bring Our Girls Home” campaign.

Geles, beautiful head-ties with symbolic prints and patterns, adorned the heads of rallying women from Lagos to London and Manhattan to D.C., as they demanded the return of 200-plus boarding school girls snatched in Chibok, Borno State, Nigeria, by the notorious Boko Haram. The callous leaders have boasted that they have already sold some of the girls for $12 as child brides in Cameroon and Chad. 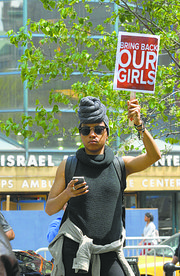 Frustration and anger at what seems to have been the absence of a forceful response, search and recovery has been inspiring the “Bring Our Girls Home” campaign.

After almost three weeks, Nigerian President Goodluck Jonathan finally spoke on the issue this week. In a televised address, he said, “Wherever these girls are, we’ll get them out.” This was as he announced a fact-finding committee to investigate the April 14 kidnapping. The Nigerian government has offered a $300,000 reward to get these girls home.

“Three weeks on now and no clue yet as to the whereabouts and fate of the missing girls. Depressing! Upsetting! Demoralizing!” said Abike Dabiri-Erewa, chairperson of Nigeria’s House of Representatives Committee on Diaspora Affairs.

She told the AmNews, “The federal government’s response has been slow and unreassuring. I have always insisted that Nigeria should seek help of experts who can offer needed assistance, especially in the area of intelligence gathering. How more than 200 girls could have been driven away in an environment where there is a strong security presence [because of the declared state of emergency] and nobody saw or noticed the movement still baffles me. However, what matters now is that those girls must be found!”

President Barack Obama said Tuesday, “We’re going to do everything we can to provide assistance to them … Our embassy in Abuja [Nigeria] is prepared to form a coordination cell that could provide expertise on intelligence, investigations and hostage negotiations and to help facilitate information sharing and victim assistance.”

Reportedly, the FBI, running this mission through the office of the director of national intelligence, might use unarmed drones and “satellite imaging and electronic eavesdropping.”

In an hour-long video, Abubakar Shekau, leader of Boko Haram, bragged this week that he has the children. “I will sell them in the market, by Allah. I will marry off a woman at the age of 12,” he said.

While 276 girls were snatched, 43 reportedly escaped. But news broke this week that amidst the renewed violence, at least eight more girls were kidnapped on Monday.

“Our focus must be to bring these girls home safely, and we should take whatever assistance is offered to achieve this,” Michael Adeniyi, the former president of the Organization for the Advancement of Nigeria, told the Amsterdam News. “Then we should concentrate on restoring peace and sanity to Nigeria.”

It appears that social media is the new black and has brought the trending issue to the forefront, which the mainstream media has ignored. On Saturday, May 3, across the nation, many major cities were the location for mass rallies featuring T-shirts, buttons, brightly colored posters and unified vocals. 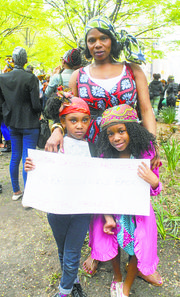 “We learned about this through Instagram #bring our girls back. It’s on fire. People are getting their news online. We young people, it is our duty to do more,” Adjie said.

In New York, attorney Janet Fashakin told the AmNews, “I brought my daughter here because the kids we are looking for are the same age group—15 to 16. My daughter is 15, so it came home to me. She could have been one of them, because many of us here do send our kids back home to go to school. They are our daughters. We believe that Boko Haram has people in high places, and that is why it is hard to stop them. That’s why we have this rally; we want to focus the attention of the world on Nigeria because there are some untouchables that we believe are behind Boko Haram, so we need external forces to come in to help us.”

With this confusion and heartbreak as a backdrop, Nigeria’s capital of Abuja hosts the 24th World Economic Forum on Africa, with international leaders from the continent, China and beyond.

The politics are murky, with theories running from an underlying effort to destabilize Nigeria for foreign intervention, to trying to unseat the embattled Jonathan, noted Chika Onyeani, the publisher and editor-in-chief of African Sun Times.

Onyeani, who is also the author of “Capitalist Nigger: The Road to Success” and “The Broederbond Conspiracy,” told the AmNews, “The government has been infiltrated. Someone is funding Boko Haram and providing them with military uniforms and weapons … There have been many kidnappings before, but never before children. Now if they take boys, they make them into conscripts or they are shot. The girls, they want to sell or make into child brides. They may kill the Christians and marry off the Muslims.” 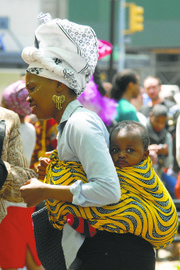 Boko Haram have long been on the African radar as they launched a campaign of murder and mayhem on students and Nigerian civilians. While this nation is suddenly preoccupied with this dire quagmire, almost 2,000 have been murdered since January 2014 during fighting and counterattacks between Boko Haram and the Nigerian military.

Onyeani noted that the girls, aged between 12-15 years of age, were taking their final exams.

Some are pointing out loudly that Gov. Kashim Shettima of Borno State is from the same place where the Boko Haram originated. Even though school officials had warned the governor that the exam must not take place that day, Shettima stated that the school would remain open and the children must go to school, as nothing would happen.

So Boko Haram arrived, dressed and armed like the Nigerian military; they put the girls on the trucks as if they were taking them to safety, but then they began firing their weapons and set fire to the school. Boko Haram means “Western education is sinful.”

Onyeani said that while people might criticize the government’s seemingly slow response, it is impossible to hide 200-plus children without someone seeing something. He said, “If people know all these as facts, why are they withholding the information from the Nigerian authorities?”

Onyeani says the world must ask Shettima “what he knows and when he knew it. The world must make it plain to northern Nigerian leaders that in their quest to drive a wedge between the Nigerian people and Goodluck Jonathan’s government, they should not resort to trifling with the lives of innocent school girls in a diabolical effort to render the country ungovernable.”

Onyeani recalled that in 2002, a Muslim cleric called Mohammed Yusuf established Boko Haram, setting up a religious complex and an Islamic school, but they were to get involved in trying to keep a leader from the north as head of the Nigerian government, hence the violence, killings and bloody disorder. Since September 2010, Boko Haram has freed hundreds of prisoners and bombed states, police headquarters, the United Nations Headquarters in Abuja and many public buildings.

Onyeani declared that “given the bold public utterances of some of the northern leaders, it is apparent that they have chosen the use of the Boko Haram as their vehicle to forcibly take power back to the north.”

Activist Minister Menelik Harris sits squarely on the side that there is international collusion in this whole tawdry affair. He said, “Nigerian and African people are forced into another ‘humanitarian scam’ using our children as a recolonization and militarization political tool.” Rather than neocolonialists and their minions begging “natural enemies” whose mission is to “enslave, imperialize, exploit, dominate, colonize ...” Africa for profit, Nigeria should organize a combined military force from the African and the diaspora nations.”

Chet Whye is organizing a march and rally for the kidnapped Nigerian girls on Saturday, May 10 at 9:30 a.m. at Marcus Garvey Memorial Park.

Kechie’s Project is hosting a rally on  Saturday, May 10 from 12-4 p.m. at the Consulate of Nigeria, 828 Second Ave. at 44th Street, N.Y. For more information, email miamah.richards@kechiesproject.org.