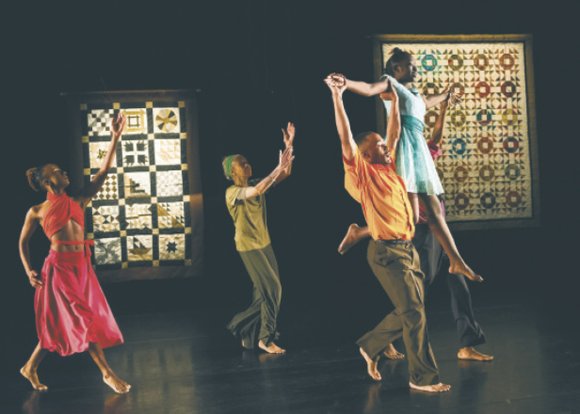 To celebrate James Baldwin, the quintessential American essayist, novelist, playwright, poet and activist, on what would have been his 90th anniversary, the dance institution New York Live Arts (NYLA) partners with Harlem Stage and Columbia University School of the Arts to present a festival in his honor.

Nonfiction writer Lawrence Weschler, with NYLA Executive Artistic Director Bill T. Jones, brought together visual artist Carrie Mae Weems, writer Jamaica Kincaid, musician Stew, poet and novelist Carl Hancock Rux and many others for this five-day festival of lectures, panels and performances. In fact, a consortium of cultural organizations throughout New York City has united to declare 2014-15 “The Year of James Baldwin,” and a citywide festival has been the result.

NYLA’s second annual “Live Ideas” series was a platform for the larger “James Baldwin, This Time!” and iconic dancer Dianne McIntyre was presented as part of “Baldwin Through Dance,” on a shared program with Charles O. Anderson (April 23-27).

Bright and colorful quilts in many sizes hung at different heights from the ceiling, and a piano sat in one corner. This was the set for McIntyre’s premiere, “This Is Time.” Composer Onaje Allan Gumbs (“Keys”) was the first to enter, and throughout the evening, he played lush tones on the piano while Baldwin’s poem “Song (for Skip)” wafted through the air.

Representing “The Children,” the young Kalimah Wouadjou (McIntyre introduced her as “only 10”) soon followed, gazing up at the quilts, then reaching on tippy toes, trying to touch each of them. McIntyre’s signature vocabulary—flickering wrists and fingers, wandering walks and rhythmic patterns—was the guide for Rachel McSween (The Witness), Yusef Miller (The Voice), William Roberson (The Brother) and McIntyre (The Time) when they joined Wouadjou in molding Baldwin’s words into movement.

Wouadjou, in a baby blue dress that was secured with a wide band around the waist, was paired with McIntyre, whose informed hands chaperoned her around the space. Also paired were McSween and Roberson, who were given stronger and more dynamic movement phrases, which they delivered so well, weaving around the periphery, continually framed by Miller’s tempered telling of Baldwin’s words.

The cast was solid because in the maturity of McIntyre’s interpretation of Baldwin, she nailed it; she captured the many faces of Baldwin. In fact, Miller’s final Baldwin words, offered appropriately with Wouadjou as the centerpiece, were: “Our children are the morning star.”

Anderson’s “Restless Natives” closed the program. Although for “Restless Natives,” Anderson used a sound score and original texts by performance poet and singer Ursula Rucker, the work “explores the core themes—the struggle to love … amid the complexities of racism, sexism and homophobia—from James Baldwin’s ‘Another Country,’” according to the press release. Roughly 18 audience members volunteered to sit on stage to help create the speakeasy atmosphere for this episodic excursion into the world of the blues.