Encore broadcast of ‘The African Americans’ starts May 11 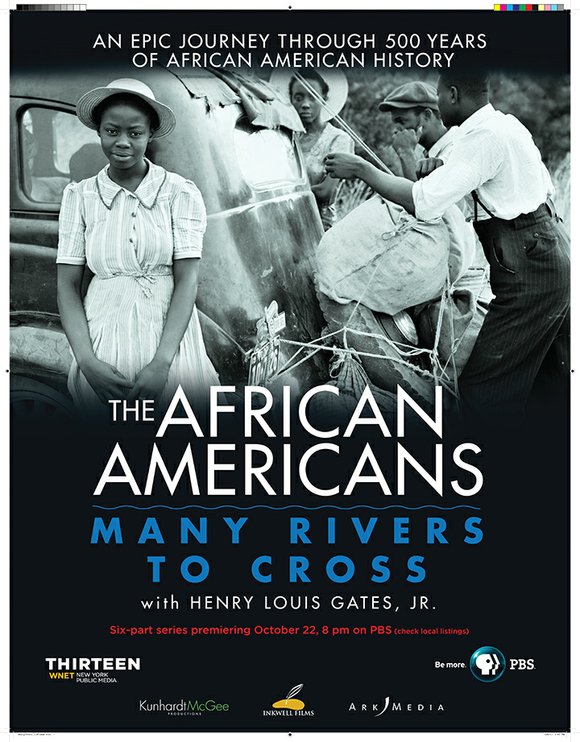 The African Americans: Many Rivers to Cross

Written and presented by Gates, the series explores the evolution of the

African-American people, as well as the multiplicity of cultural institutions, political strategies and religious and social perspectives they developed, forging their own history, culture and society against unimaginable odds. Commencing with the origins of slavery in Africa, the series moves through five centuries of remarkable historic events right up to the present—when America is led by a Black president yet remains a nation deeply divided by race.

The intermission segments also include interviews with Tony and Grammy Award-winners Audra McDonald and Dee Dee Bridgewater; prominent jazz musicians Regina Carter and Ron Carter; and Pulitzer Prize-winning author Douglas A. Blackmon (“Slavery by Another Name: The Re-Enslavement of Black Americans from the Civil War to World War II”). Other segments highlight cultural organizations in the New York metropolitan area that play important roles in today’s local African-American community. Viewers will learn about the history and current happenings at the Apollo Theater, the Harlem Arts Alliance, the Harlem Children’s Zone, the Brooklyn chapter of the NAACP and the New-York Historical Society. Regina Carter also performs two songs from her latest release, “Southern Comfort.”

“The story of the African-American people is the story of the settlement and growth of America itself, a universal tale that all people should experience,” said Gates, director of the Hutchins Center for African and African-American Research and Alphonse Fletcher University professor at Harvard University. “Since my senior year in high school, when I watched Bill Cosby narrate a documentary about Black history, I’ve longed to share those stories in great detail to the broadest audience, young and old, Black and white, scholars and the general public. I believe that my colleagues and I have achieved this goal through ‘The African Americans: Many Rivers to Cross.’”