Unions, activists, and immigrants rally on May Day 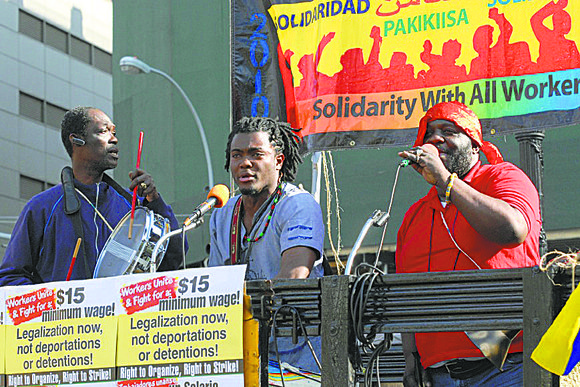 At the event, which was sponsored by the Labor Rights, Immigrant Rights, and Jobs for All Coalition, attendees demanded an increase in the minimum wage, fair contracts for city employees, an end to deportations, national immigration reform and the enactment of the DREAM Act in New York, the use of union labor for all construction projects, the preservation of the state’s “scaffolding law,” universal pre-kindergarten and raised taxes on Wall Street and the richest 1 percent.

“The most powerful way for working men and women to improve their lives is by joining together and raising their voices as one,” said Mario Cilento, president of the New York state AFL-CIO, in a statement. “That is the spirit of May Day, and that is why union members, immigrant activists and community leaders came together on May 1 to fight for worker rights, comprehensive immigration reform and the vital services all New Yorkers rely on.”

“May Day is about all workers,” said Alvarez. “The city’s labor movement is a microcosm of our larger society, representing workers from all cultures and economic backgrounds who are standing up for the issues that affect all of us. The fight for better wages isn’t just for low-wage workers, just like the fight for a path to citizenship doesn’t only concern immigrant workers. On May Day and every day, we must band together for justice for all working men and women.”

“The labor movement is strongest when we live out the values of May Day: international workers’ solidarity; unity across differences of race, religion and nationality; commitment to a shared struggle,” said Bowen. “A century ago, workers acting as one on these values won the eight-hour day, the weekend and the minimum wage. This May Day, we’re honoring their struggle and standing together for our own demands. We’re marching together for a more equitable city, a just immigration policy, fair contracts and fair wages for all working people—and support for CUNY’s own low-wage workers, the adjunct faculty.”

Earlier that day, members of the New York Coalition to End Wage Theft linked up with Local 78 and Local 79 to rally against wage theft at two non-union work sites.

“There is an epidemic of wage theft in New YorksState and an enormous backlog of cases at the Department of Labor. Marginal improvements are insufficient,” said Amy Carroll, deputy director of the Center for Popular Democracy. “The rule of law and the dignity of New York’s workers depend on real reforms.”

According to labor activists, in the non-union construction industry, workers are frequently paid below what’s known as a “prevailing wage” or not paid at all and receive no overtime pay. Workers are also exposed to hazardous materials and numerous other health and safety violations. Back in 2010, the National Employment Law Project found that close to $1 billion was stolen from low-wage workers every year in New York City alone.

Mauricio Jimenez, a member of Make the Road New York, talked about his struggle with earning a decent living.

“Earning the low wage of $10 an hour, I struggle to pay for necessities that everyday families need like rent, food and transportation. When those low wages get stolen, I not only struggle, I suffer,” said  Jimenez in a statement. “While working as a subcontractor in 2009, I worked two full weeks without ever being paid. It has been five years since I filed a DOL [Department of Labor] claim, and I have yet to see those wages.”