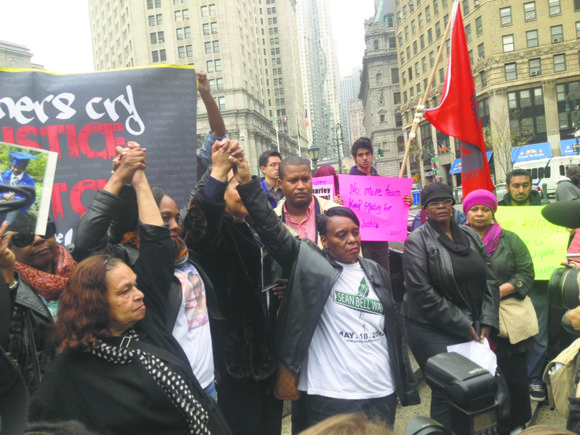 It all started with unarmed Bronx teen Ramarley Graham being chased by NYPD officer Richard Haste into his grandmother’s bathroom in February 2012. It ended with him getting shot in the chest and later dying at the hospital, leaving relatives and friends fighting for justice.

This is what Graham’s mother, Constance Malcolm, recalled last Friday, Mother’s Day weekend. Malcolm was joined by Valerie Bell, Iris Baez, Kadiatou Diallo, Hawa Bah and Carol Gray, a group of mothers who all have a similar stories. Their sons were killed by bullets fired by NYPD officers’ guns, and they rallied to demand that the U.S. Department of Justice launch an investigation into Graham’s “unjustifiable” death.

“We need this investigation,” Malcolm exclaimed. “Because if they don’t, it’s sending the wrong message that you can run into somebody’s house without a warrant or anything and kill an unarmed child.”

At the time of Graham’s altercation with the NYPD officers, they claimed he had a gun. But no weapon was found at the scene. After the office of the Bronx district attorney failed to indict, the U.S. Department of Justice indicated it was reviewing the case, but Malcolm said there have been no indications that the case is open for investigation. She said they told her that “they will look into the case.”

“I have another son who was 6 at the time Ramarley was killed. My biggest fear is that he [will] walk the street one day, and they kill him. This is why I’m out here fighting so hard that it doesn’t happen to him or any other child. Too many mothers are crying,” Malcolm added.

Diallo, mother of Amadou Diallo, has a similar story to recall. Her son, who was 22 at the time, was hit with 19 of the 41 bullets that were fired after him by four NYPD officers as he stood innocently at the doorway of his Bronx apartment building in 1999. The officers claimed they thought he had a gun. The officers were ultimately acquitted for second-degree murder.

Kadiatou Diallo, who flew from Maryland to New York to join the rally at Foley Square, told the AmNews that she was living in Nigeria at the time she got the call that he son was killed.

“The acquittal was surprising. Fifteen years later, I want to just help other families that are in crisis. I understand the pain these mothers are going through, because it’s something I can relate to,” she said. “We need justice, and we want to move forward.”

Kadiatou Diallo told the AmNews that she recently launched the Amadou Diallo Foundation, a nonprofit organization that aims to “promote racial healing and enhance police/community relations, and to provide academic scholarships to students of African descent,” she said.

In response to the mothers’ outcry for Graham’s justice, and NYPD accountability, NYPD Commissioner William Bratton told reporters on Friday, “I’m very comfortable all of those cases are exhaustively investigated by us by the appropriate district attorneys’ offices. So while I empathize with the families of the deceased, [in] a significant number of those instances, I’m sorry, their loved ones were engaged in very significant criminal activity. ”