‘NYPD Blue’ star hits big screen in ‘From the Rough’ 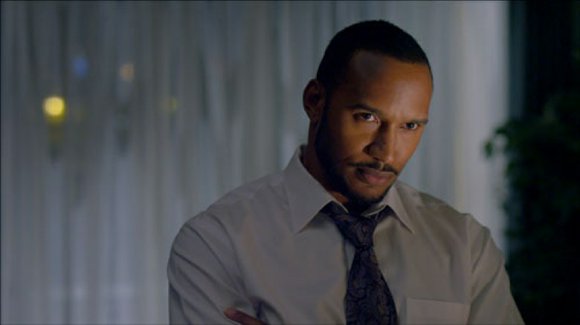 Actor Henry Simmons took time out of his busy schedule to talk with this journalist about his latest movie, “From the Rough,” a movie he stars in with Taraji P. Henson, Michael Clark Duncan and Tom Felton. The movie opened Friday, April 25.

The film depicts the true life story of Catana Starks, a female Tennessee State men’s golf coach who overcame incredible odds and deep-seated prejudice to become “the first” African-American woman ever to coach an all-men’s team at a collegiate level.

Henry Simmon’s character, Kendrick Paulsen Jr., is the antagonist to Taraji Henson’s character of Catana Starks, believing that Starks could not handle the position of a men’s golf coach. Simmons talked about his attraction to the movie and the role he played.

“When I first read the script, I initially thought it was a story that took place in the 1950s or 1960s and was shocked to see it took place in the 1980s. I was shocked to realize that people of color still face those types of barriers. It’s really is a shame, and for that reason, I really wanted to be a part of the story and get the story out there so people understand that these things are not part of the past but go on in our recent history,” remarked Simmons.

Born in Stamford, Conn., the son of Aurelia and Henry Simmons Sr., Simmons is one of three children. He was awarded a basketball scholarship to Franklin Pierce College in New Hampshire, where he earned a business degree. After college, Henry took a job in financial management, but it didn’t last because Simmons was attracted to acting first and foremost.

Simmons’ first acting gig was as a hotheaded youth in the movie “Above the Rim” with Tupac Shakur. He went on to appear in movies and TV, most notably as Detective Baldwin Jones on the ABC police drama “NYPD Blue.” He also played Queen Latifah’s boyfriend in the 2004 action-comedy film “Taxi.” He had a leading role in “Shark,” a CBS drama starring James Woods. Simmons also appeared in “World’s Greatest Dad” and “Man Up!” and after “From the Rough,” his next movie is “No Good Deed,” starring Idris Elba and Henson.

“Professionally, I enjoyed the opportunity to play someone ‘In the Rough’ that I rarely get a chance to play. Someone who is perceived as evil, I guess. That is a color I don’t normally play. I want to stretch and grow as an actor, and this role presented that opportunity.

“I did not have a problem playing the character but did have a problem with the character. People like that, whatever their reasons may be, may have good intentions or what they believe are good intentions. My character felt he was doing his best for the school by removing Ms. Starks from her job, but actually what he was doing was destroying people’s lives,” remarked the talented actor. “I tried to show that this man was racked with insecurity. His insecurity was one of the reasons he had a problem with strong women. I think one of his other issues was he felt unappreciated.

“You know, it’s funny,” Simmons continued, “but you cannot work to get respect. However, if you do your work respectfully, then you gain respect. If you do things looking for respect or look for approval, that is where it causes problems. You have to work to the best of your ability and let things fall where they may.”

“From the Rough” was actor Duncan’s last movie. Simmons talked about working with the soulful Duncan.

“When Michael Clark Duncan passed, it was an absolute shock. I knew that he was sick, but I thought he was going to be OK. But when he passed, I was in shock for days. I couldn’t understand how a man so good with such a big heart, so giving and generous, a great man, could be taken away,” remarked Simmons. “I prayed for Michael, he stayed on my mind. I just could not believe he died. But I was so grateful to have had the chance to work with him.

“Professionally, when Michael showed up on the set, he brought an element of warmth that was not present in the script. The man was so talented. Personally, it was a pleasure knowing a man like that. He walked into a room and filled the room with his voice, his personality and his warmth. The man loved life—you could see it in his smile. You could see his heart. He was a gentle giant. That is what he was. He will be missed.”

However, Simmons did not meet Starks during the filming of the movie. “I did have an opportunity to meet Ms. Starks at the premiere of the movie. She seemed like a woman of intelligence, class and strength. There is a great deal of warmth about her. She is a woman who commands respect and certainly deserves respect,” stated the actor, whose movie “No Good Deed” will be out in September.

For more information on the film, visit www.fromtherough.com.