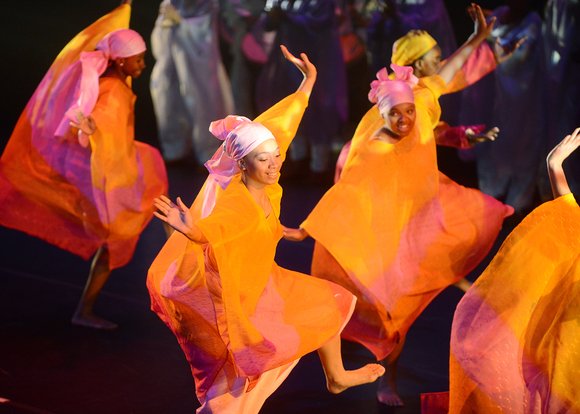 This Memorial Day weekend, the 37th annual celebration of DanceAfrica, the nation’s largest festival dedicated to African culture, sweeps into the Brooklyn Academy of Music with a exuberant exploration of the rich cultural heritage of Madagascar with “DanceAfrica 2014: Celebrating Africa’s Bantaba (“dancing ground”).

This vibrant annual event spotlighting African and African-American dance was founded by Chuck Davis in 1977. Today, it has grown from a showcase of music and dance companies into a cultural feast that features master classes with distinguished dance teachers, a film festival, art exhibits, a bazaar brimming with unique items and more.

“We should have had a clue back in the 70s when the second DanceAfrica drew a standing-room-only crowd thanks to the creator, our supporters and the community,” Chuck Davis told the Amsterdam News during a recent interview crammed into his hectic pre-performance schedule. Davis, standing over 6 feet tall and dressed in colorful African robes, is a genius with a booming voice, a generous smile and a warm manner. He has nurtured DanceAfrica into the national phenomenon it is today, with replicas in cities throughout the U.S. For 37 years, he has kept it fresh. This year is no different.

Deeply committed to programs, which he describes as “edutainment,” Davis described how he chose the focus of this year’s DanceAfrica festival—Madagascar. “This year, I decided that I wanted to explore the world’s second largest island country, which, with its infusion of African and Asian settlers and French influence, maintains a unique and diverse heritage,” Davis said.

“We went to Madagascar and auditioned 11 different dance companies. We were there one week when we discovered and selected the music and dance ensemble Groupe Bakomanga, founded and led by Malagasy music star Mariette Rosarinala,” he said. Bakomanga embodies the country’s rich variety of African, Asian and French cultural influences using jubilant accordion-driven music and traditional dances that honor its ancestors, celebrate its rice harvest and warmly welcome visitors.

In addition to selecting Bakomanga, Davis invited award-winning musician Madagascar Slim, Tsingory Dance performers and a dynamic singer named Hanitrarivo Rasoanaivo to open the festivities. Their performances were a delightful blend of music and dance.

Their performances capped off a weekend which included the traditional African Burial Ground ceremony honoring elders who have passed on and a community welcome with a performance by BAM/Restoration DanceAfrica Ensemble. On May 18, during the special opening celebration, Rasoanaivo, Slim and Groupe Bakomanga rocked BAM’s jam-packed Howard Gilman Opera House with infectious song and dance rhythms that gave folks a taste of the DanceAfrica festival coming up this Memorial Day weekend, May 23-26.

If that pre-performance spectacle is any indication, expect Memorial Day weekend to be packed with high-voltage excitement. Madagascar’s Groupe Bakomanga will be joined by two other dance companies. The African-American Cultural Center Dance and Drum Performance Company, based in Buffalo, N.Y., will highlight West African culture while also paying homage to pioneers Katherine Dunham and Pearl Primus. Brooklyn’s Asase Yaa African-American Dance Theatre will delight with its unique productions capturing the essence of dance along the African diaspora.

Davis says his hope is that “when you walk out of this sacred dance space, you will realize that while DanceAfrica is at the Brooklyn Academy of Music, this space is not a theater, it’s a community.”