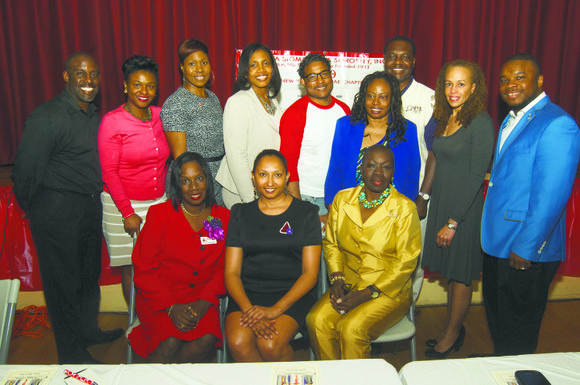 On May 18 at the Kennedy Center in Harlem, Delta Sigma Theta Sorority’s New York Alumnae Chapter held its May Week national program, which was created in 1920 during the sorority’s second national convention. During May Week, each chapter conducts a program in its community that emphasizes the importance of higher education in the community, especially for Black women.

This year’s May Week theme was “The Authors Among Us” and featured a panel of authors including Darlene Aiken, Silas Burgess III, Darrius J. Gourdine, Mandel Holland, Cynthia M. Horner-Harris, Saquan Jones, Mosi Singleton and Whitney D. Smith. These writers spoke to an eager audience about self-publishing and writing for novels, feature films, television and journalism.

Delta Sigma Theta Sorority President Leyonna M. Barba said, “We thought this May Week program would be a great opportunity to showcase the talent within the ‘Divine Nine’ [Black Greek] organizations while promoting the importance of education for our youth. These writers’ stories, either through sermons, poetry, plays, television scripts or novels, add to our cultural enrichment and need to be showcased.”

During its 93-year history, the Delta Sigma Theta New York Alumnae Chapter (NYAC) has continually incorporated free community programs consistent with the directions and emphasis recommended at the national level. NYAC’s service area encompasses the borough of Manhattan from river to river.