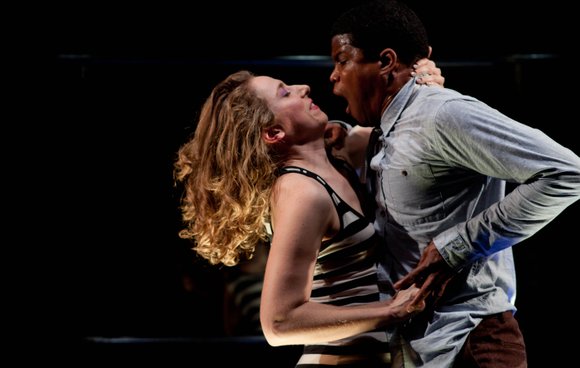 If you want to have a theatrical experience that will leave you stunned, then you need to head to the National Black Theatre on 125th St. and 5th Avenue and see “Dutchman.” It is the 50th anniversary of this powerful, emotional drama created by the late Amiri Baraka.

This production is a solid effort by the National Black Theatre and the Classical Theatre of Harlem to bring Baraka’s work to life for a new generation of theater patrons to experience. I must admit that I had seen the play before, but I had forgotten the storyline. I was bluntly reminded of the passion, power and rage contained in this production, which runs without intermission.

Set in the 1960s, the play takes place on the A train and is about a chance meeting between a young Black man and young white girl. The meeting begins as flirting but turns into something very different and becomes dangerous. The white girl, Lula, comes on heavy one moment and calls the young Black man, Clay, a “n—r” the next. Lula definitely seems bipolar, but she also represents how some whites viewed Blacks back in those times. She tells Clay about himself, what his living situation is and what type of person he is, just based on meeting him on the train. At first he is amused by this, but as the conversation continues, he gets offended. Then he gets angry.

This play will put you through so many emotions. And believe me, you will be in good company, because these two characters go through plenty of emotions of their own. The play’s ending will shock you and leave you wanting to talk. You’re in luck, because after each performance, there is a talkback with the cast, the director and representatives from the National Black Theatre and the Classical Theatre of Harlem. Make sure you stay for the talkback, which gives you a chance to ask questions and hear food-for-thought about what Baraka was trying to convey to his audience about the atmosphere of the times and the degrading way that Black men were treated. The play finally shows that everyone has a breaking point.

This cast is completely on- point and includes Sharif Atkins, Ambien Mitchell and Lorenzo Scott. It is stirringly

directed by Carl Cofield. I don’t want to say anything else; go and experience this play for yourself. Be warned: This is strictly for a mature audience. The play will only run through May 23, so hurry up! For ticket information, go to www.nationalblacktheatre.org or call 212-722-3800.