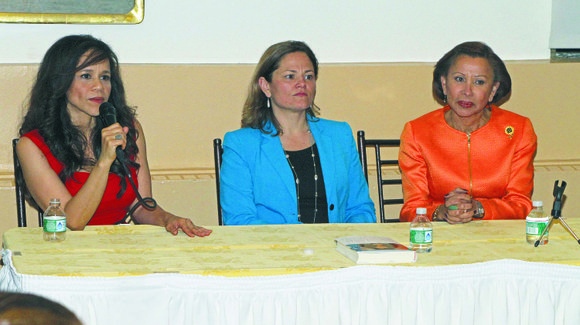 Oscar-nominated actress and Emmy-nominated choreographer Rosie Perez was very frank at her book signing at Restoration Plaza in Brooklyn. Talking about her “Handbook For An Unpredictable Life: How I Survived Sister Renata and My Crazy Mother, and Still Came Out Smiling (with Great Hair),” Perez held the audience captive with her story of how, abandoned by her schizophrenic mother shortly after her out-of-wedlock birth, she was raised by a loving aunt—whom she thought to be her mother—until she was about 3. Then one day, her mother showed up, took her from her aunt and, without any explanation, sent her to live at a Catholic home for boys and girls. And there her troubles began. “I didn’t really want to write about this story of mine, yet felt like it was a responsibility that I couldn’t avoid,” said Perez. “I held back because I didn’t have the emotional strength to lay out the years of abuse for the entire world to see. But I’m now ready to share my journey, communicate how good it feels to no longer live in fear of what others may think and move on.”