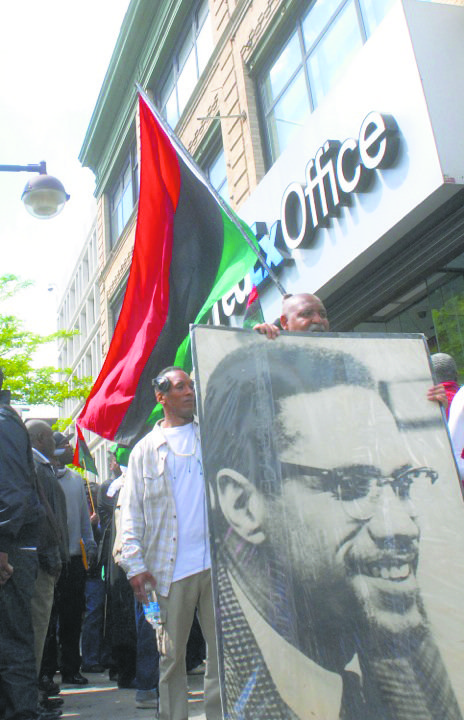 Dozens of people celebrating what would have been Malcolm X’s 89th birthday stood beneath a hoisted red, black and green flag as it flapped high outside the FedEx store near the corner of 125th Street and Adam Clayton Powell Jr. Boulevard.

While big stores like Applebee’s, McDonald’s, Red Lobster, DSW, RadioShack and Party City shut their doors in honor of the annual observance of the May 19 birthday of the Black nationalist movement icon, the manager at the FedEx refused.

Organizers request all businesses to participate by closing from 1 p.m. to 4 p.m. as a show of respect for Malcolm X and their patrons in the Harlem community. This year FedEx was the lone holdout.

With police, including the 28th Precinct’s Commanding Officer Olufunmilo Obe, standing quietly outside the store containing staff–but no customers—those rallying called for the store to close. Not doing so, they shouted, would result in a call for boycotts and continuous rallying, as experienced by American Apparel a couple of years back when they had a poster residents deemed to be offensive. “They were the first to close this year,” retorted Omowale Clay, co-founder of the December 12th Movement. The group has hosted the shutdown of stores along Dr. Martin Luther King Jr. Boulevard, also known as 125th Street, for the past 22 years.

“Verizon closed all day, and they paid their employees,” said Clay. “The store owners understand that this is a commercial moment of silence for one of our heroes. It doesn’t make any economic sense to resist our request—which they receive plenty of notice on ahead of time.”

Clay said that, with “literally 99 percent compliance with the shutdown and commemoration on the 89th anniversary of Brother Malcolm’s birthday, the FedEx Store on 125th Street refused to honor the shutdown and close during the three-hour period. The manager, a Black woman, first tried to raise [the issue] that FedEx was a corporate store and therefore was not obligated to close. In the face of the fact that Red Lobster, Staples, DSW, Applebee’s, Marshalls [and] Party City (to name a few) are all corporate stores and closed, the manager then became hostile and threatening to the people who tried in vain to reason with her.”

FedEx store manager Shatocka Rose decided to remain open. Clay told the AmNews, “she refused to honor the annual tradition and shut down her business. First she tried to raise that FedEx was a corporate store and therefore was not obligated to close. We asked her was it not a franchise—and therefore her decision. We told her that for 22 years the December 12th Movement, the political children of Malcolm X, have waged a fight to create in the central business district of Harlem a three-hour commercial moment of silence by all business establishments along the 125th Street Corridor. In respect for the history and legacy of Brother Malcolm, Black people have supported and won the fight that all businesses shut down during this three-hour period. Today, that fight is demonstrated by the fact that all businesses along this commercial strip in fact do shut down.”

As more and more passersby stopped to ask what was going on, the crowd grew more concerted in their call. “This is those white folks and their loyal Black friends who say we people have the audacity to say ‘shut it down,’” said Modu, who was protesting outside FedEx.

Neither the Memphis, Tenn.-based corporate media relations manager nor the FedEx district manager of New York, Allen Kim from the Astor Place store returned calls from the AmNews.

“As a community we know all too well that every other community advances the will of that community to honor their respective cultural values and politics,” Clay told the AmNews. “We see that reflected in the celebrations that we honor or respect that, most often, have nothing to do with our plight in America. We therefore call on our community and freedom-loving people to remember the words of Frederick Douglass, who instructed us ‘that power concedes nothing without a demand; it never did and it never will,’ and Brother Malcolm who told us ‘No Compromise, no sell-out.’”

In the weeks leading up to May 19, organizers visited every business. “We talked to the managers of all the stores, including FedEx, at least three times. They all got letters hand-delivered to them. Each time they all said they would participate in the annual Malcolm X birthday commemoration and close from 1 p.m. to 4 p.m.,” organizer Kamau Brown stated.

Rose was unavailable for comment. She instructed Ariel, a store team member, to forward all phone calls on the matter to their corporate media relations office in Texas. When asked for the contact information for the FedEx district manager in New York, Ariel refused to provide it.

When asked Ariel was asked if she knew that FedEx was the only store open on 125th Street, she adamantly stated, “For 20 years we have never closed.” They closed last year.

Brown stated, “Every store that does not participate in honoring Malcolm X is known by the community. It is disrespectful. We let everybody know about it and encourage them to boycott. We have not had to do it with FedEx until now.”

Ariel told the AmNews that she had told Clay to call the corporate office. Informed that other stores had closed, she responded, “Well, they might not want to keep their jobs. I do.”

Her male co-worker urged her to stop talking. She did not. Told that the protestors were talking about boycotts, Ariel added, “I don’t know what they don’t understand about just calling the corporate office.”

“El Hajj Malik El Shabazz, Malcolm X, organized, worked, taught, and died in Harlem. The history and legacy of Malcolm X remains in the hearts and minds of Black people in the United States,” said Viola Plummer, co-founder of the December 12th Movement. “The Black Power march and rally draws people from all over. National Black United Front leader Kofi Taharka from Houston, Texas, and [Concerned Family and Friends of] Mumia Abu—Jamal leader Pam Africa from Philadelphia ... vowed to take the boycott to their states.”

Clay added, “The people of Harlem have now joined together to call for a boycott of the FedEX store to demonstrate that we cannot allow businesses in our community to disrespect the cultural and political will of the community as we honor one of Black people’s greatest heroes.”