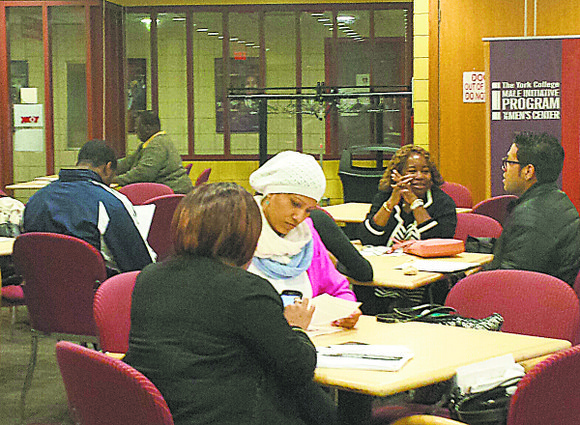 On Thursday, May 15, the York College Black Male Initiative Program recognized the achievements of previous participants of the Teachers as Leaders Program during a welcome back event on the college’s campus in Jamaica, Queens.

Delivering the keynote speech, Lindamichelle Baron, chair of the Department of Teacher Education at York College, described the former participants of the program as those who are willing to make a change in the education system. She said many educators have served in schools where some teachers practice business as usual.

“And business as usual kills our children. Those young men and young women in [the] classroom that don’t see why they are there, don’t see hope, don’t see something for it in their future,” said Baron, adding, “If they don’t see something in their future, they are willing to live in the present that doesn’t offer much for them. The present offers streets, the streets that are compelling. It offers them incarceration and death. That’s literally what our children have begun to buy into. So we have to be leaders with passion.”

The Teachers as Leaders Program (TALP) was established by the City University of New York’s Black Male Initiative in 2008 with funding for the first two years. Jonathan Quash, director of the York College Male Initiative, said several of York’s TALP participants have graduated and are currently serving in teaching and mentoring roles in schools all around the world, including in South Korea.

“And so during that two-year period, we had a total count of 54 students throughout the university who received tuition reimbursement, certification workshops for their testing and other supplementary materials in information workshops to help them become certified teachers,” said Quash, adding, “These young people are the embodiment of the program and the York College experience. Their success proves that if we invest in the youth of tomorrow, there will be a return on that investment.”

Baron called on the teachers to focus on helping the children rather than being burnt out trying to satisfy all parties.

“We get beat by, sometimes, the administrations that are so consumed by getting the best grades that they don’t have the best students. We get beat by the parents, we get beat by the students that don’t feel how much we care. So what do we do? We burn out,” Baron said, continuing, “So we have to work together. We have to go into schools and get together and say, ‘We are revolutionaries and won’t allow ourselves to burn out.’”

She advised that teachers should first recognize that though they are leaders and revolutionaries, they do not have all the answers.

“We have to try to determine what we need to do differently, not business as usual. Not just so our children can’t be incarcerated, not just so they won’t be killed, but so they can maximize who and what they are,” said Baron. “We come from a tradition of strength and power and knowledge … and our children think they’re supposed to be street thugs. We have to be the ones to help them make that difference.”

Five campuses, including York, initially participated in TALP, but eventually, the Borough of Manhattan Community College, Brooklyn College, City College, the College of Staten Island, Hostos, Hunter, City Tech, Queens and York all began to participate in the program.

“The purpose is to essentially enroll students of underrepresented population and then retain them. A part of the program is designed to get more Black male teachers into the classroom in New York City public school system,” said Quash. “We’ve been very successful in doing that. Currently what we do in an after-school format, from Monday to Thursday from about 3:30 to 6 p.m., we have high school students and middle school students coming for testing assistance, usually for the SAT or regions programs, or … specialized testing exams for high school.”

He said these individuals work very closely in the course of the semester with about 30 to 35 students in the program patterned after the “Let’s Get Ready” model. The mission of “Let’s Get Ready” is to expand college access for low-income high school students by providing free SAT preparation and college admission counseling. It accomplishes this mission by mobilizing and training volunteer college student “coaches” as tutors and mentors who provide not only instruction, but also the encouragement and inspiration students need to succeed, said the office of the York College Male Initiative Program and Men’s Center.

Michael Waugh, a 2010 TALP participating graduate and a New York City public school math teacher, said the program was instrumental in his life.

“With the program’s support, I was given opportunities that I wouldn’t have had otherwise,” said Waugh.

Also speaking at the event was Geneva Walker-Johnson, vice president for student development, who said the title of the program itself embodies a lot.

“Because you teach in everything you do, every person you meet, every interaction you have and reaction that you have, you are teaching a lesson. You are also leading by example,” said Walker-Johnson. “So every action you take, every interaction you have, every person you interact with, you are leading. And lots of time, people are just watching you; you don’t realize you may be doing something or saying something and you look over and someone is trying to figure out and interpret what you’re doing.”

Another former participant who shared his experience was Emmanuel Thelusma. He currently works within the Academic Advising Center at Queens College. Thelusma said the experience he gained from the program helped put him directly in the classroom.

“So for students like me, who’s never taught before or has never worked with students of different age groups, it was a great opportunity to actually be hands on and working on the field with students to kind of make a difference in the lives of the students that matter most to us. Ironically enough, I pretty much do the same thing now. I’m trying to influence other young men we meet to kind of do same thing and be more involved,” Thelusma concluded.

“We prepare teachers who are currently in the school system, primarily New York City Department of Education. We prepare them to either become instructional leaders or school district leaders. The school building leader position consists of chairperson or any other administrative position and a district leader would be someone that will be at central office somewhere.”

Genao said the program has primarily been working through word of mouth, “So what we have been doing is sending the messages out to the Title 1 schools or inner city schools, which are primarily low-income neighborhoods, and we are trying to get the word out to have their teachers come into our program at Queens College so they can actually go back to the school systems to assist in benefiting our kids,” she concluded.

An English education major at the event, Zomayra Jack, said seeing her mother interacting with kids motivated her to want to become a teacher.

“Once I became a high school student, I always worked with kids. I would either work in the younger grades or I would teach my peers. And I also worked in after-school programs. I also tutor kids, so, from high school ,all I ever did was work with kids,” said Jack.