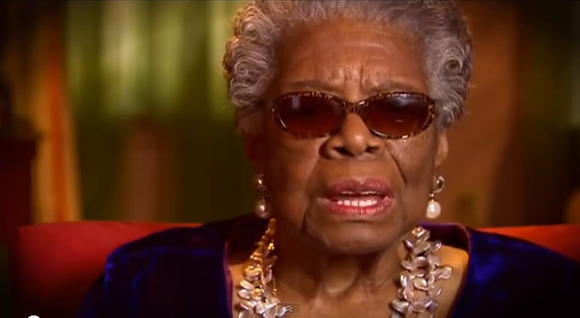 "My mission in life is not merely to survive, but to thrive; and to do so with some passion, some compassion, some humor, and some style." - Maya Angelou

The celebrated author, poet and civil rights activist Maya Angelou passed away at her Winston-Salem, North Carolina home Tuesday. The 86-year-old was found on Wednesday morning and had been battling health issues for some time.

"One isn't necessarily born with courage, but one is born with potential. Without courage, we cannot practice any other virtue with consistency. -Maya Angelou

Angelou was born Marguerite Annie Johnson on April 4, 1928, in St. Louis, Missouri. She was the victim of sexual abuse as a child, which led to her to author her world renown autobiography "I Know Why the Caged Bird Sings." In her life she wrote six additional autobiographies and many books of poetry and essays. While she is well known for her writing she also worked as an actress, singer, dancer, reporter, producer, editor, and teacher in her lifetime. She was also one of the first African American film directors.

For her work she won three Grammy awards and was nominated for a Pulitzer, a Tony, an an Emmy.

"Throughout her life and through her unprecedented roster of achievements, Dr. Angelou has exemplified the very definition of 'pioneer,'" said MLB Executive Vice President of Baseball Development Frank Robinson in a statement earlier this week.

Angelou was scheduled to be honored with the “Beacon of Life Award” at the 2014 MLB Beacon Award Luncheon on May 30 in Houston, but canceled the appearance earlier this week due to her poor health.

"I am very proud to be one of the MLB Beacon Award honorees, amongst an impressive list of figures that were, and still are, part of the civil rights movement," Angelou wrote in a statement expressing her regret at not being able to attend the event.

"Nothing can dim the light which shines from within." -Maya Angelou

Memorial services have not yet been planned. Check back for updates soon.