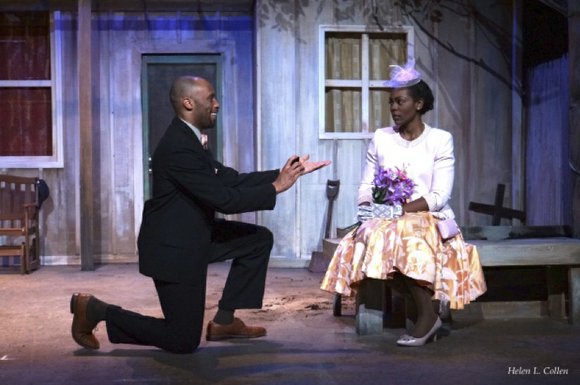 “The Seeds of Abraham”

The Billie Holiday Theatre is currently showing “The Seeds of Abraham,” a play that is both a drama and a comedy. It is also a daring piece of theater in this day and age. The Billie Holiday Theatre has always done family-centered programming and is known for doing plays that have amusingly religious scenarios. But this play takes the motif to another level, with the premise that God does speak to some people and that families can believe in positive prophesies about their future. This play brings to the stage a religious family who has a close relationship with God, has experienced mighty prophesies about their lives and not only believes in the prophesies, but wants them to come true.

This play is the first work of African-American playwright Angelica Cheri and, as she shared on its opening night, is based to some extent on the story of her real-life family. The audience meets a family—Thea, the mother; David, the 16-year-old son; and Esther, the 17-year-old daughter. Thea has just married T.L. McHouse, and David is not happy about it. David and Esther’s father was a prophet named Abraham, who died of cancer. Although we never see him, his words live on. He prophesied that Esther would be the mother of kings and queens and that David’s singing voice would have the ability to heal the sick. Then, Thea speaks to God directly, and he warns her of upcoming disasters through vivid dreams and signs.

Watching this production, I thought it daring to present a drama in which the characters have and believe in these special relationships with God and the prophesies about their lives. Cheri makes it clear why this underlying religious connection is so believable on stage. “This is about my family. These characters are real people. David is my father, and this is how my family functions. His father did prophesy over him and said he would be a minister of the gospel, and he sings. These are people, and they live their lives with the Lord. But they have been broken and are trying to heal themselves,” Cheri said.

This is a play for the entire family, as is usual for the Billie Holiday Theatre. The play is set in Bakersfield, Calif., in 1962, so it also takes one back to that old-time religion and a time when displaying one’s faith openly was more commonplace than it may be today.

Even though the play deals with prophesy, miracles and talking to God, there is also a great deal of humor, and elements of betrayal and thievery.

The cast is fun to watch and includes Bianca Jones as Thea; Donnell E. Smith as David (who has a wonderful vocal instrument); Simone Leanora as Esther; Ty King as Jimmy, the physically and mentally disabled son of T.L.; Alex Ubokudom as Willie Cartwright, the minister’s son and Esther’s boyfriend; and Keldrick Crowder as the stuttering TL.. McHouse. The hysterical play is directed by Reginald Douglas.

On another note, for the first time in 42 years, the Billie Holiday Theatre is struggling and has started a fundraising campaign called “Back the Billie.” If you have ever visited the theater and enjoyed one of its many entertaining bits of fare, then you know what a value the institution brings to Brooklyn’s Bedford-Stuyvesant community.

If you want to help, call 718-636-0918 and find out how you can make a donation. For ticket information, go to www.thebillieholiday.org. “The Seeds of Abraham” runs through June 23.