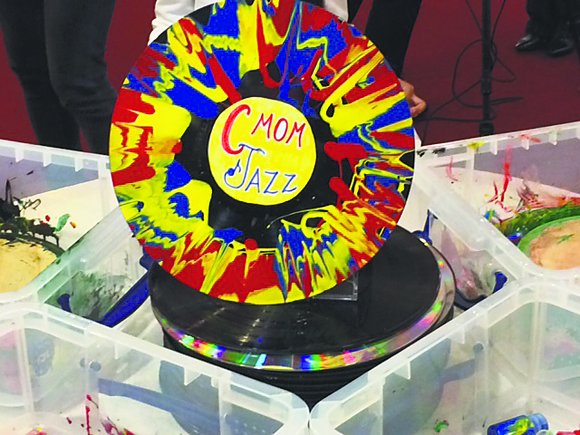 Designing your own record Photo by Ron Scott

Recently, preschoolers were totally involved in their new activities as they were introduced to jazz through arts and crafts and live music by pianist and composer Jonathan Batiste.

This interactive jazz experience for preschoolers and older children is a new jazz exhibit at the Children’s Museum of Manhattan (212 W. 83rd St.) entitled “Jazzed! The Changing Beat of 125th Street,” which is running now through December 2014.

The exhibit is the result of a collaboration between the Children’s Museum and the National Jazz Museum in Harlem. “This is a year’s worth of work putting this project together,” stated Loren Schoenberg, artistic director of the National Jazz Museum. “This gives us an opportunity to introduce this great music to youngsters and also get their parents involved as well. The Children’s Museum is a great asset in this project.”

The featured artists of this exhibit are Ella Fitzgerald, Duke Ellington and Bill “Bojangles” Robinson. After watching a 1921 performance of Robinson’s stair dance routine at the Palace Theatre in New York, children were having tons of fun tapping up and down a set of “Tap-Dancing Stairs,” framed by painted red curtains. One of the daily jazz workshops also helps children design their own tap shoes.

In the workshop “Ella Fitzgerald: Learn to Improvise!” with the iPad app Garage Band, children can record their own version of tunes like “A-Tisket, A-Tasket” or “Happy Birthday,” including scatting, then save it to SoundCloud to download at home.

Don’t be afraid to sing or scat at the 1930s jazz club microphone or sit at the little round table and listen to Fitzgerald’s scat improvisations and the voice of Billie Holiday!

Ellington’s granddaughter, Mercedes Ellington, who was present for the opening, noted, “Music and children is such a great combination. This is the best time to introduce them to the music; they soak it up like a sponge.”

Jonathan Batiste plays the melodica with children at the Children’s Museum of Manhattan.

“Romare Bearden: My World as Colorful Melodies” offers children an opportunity to design a jazz-inspired collage using sheet music as well as periodicals donated by the Jazz Museum in Harlem.

The Jazzed! web wall infographic shows how the jazz of the Harlem Renaissance is connected with multiple generations and has impacted the art and culture of today.

On display from Ellington’s band are Ben Webster’s saxophone, Cootie Williams’ trumpet and a record sleeve signed by the entire band (on loan from the Institute of Jazz Studies at Rutgers University).

Pianists will play every Tuesday, Thursday and Friday during the months of July and August. There will be live performances on Saturdays and Sundays beginning June 1 with Meg Okura and the Pan Asian Chamber Jazz Ensemble.

This exhibit is one of the best all-around interactive fun programs that invites youngsters into the swinging world of jazz. The exhibit is great fun for kids and those accompanying them.

The Children’s Museum of Manhattan is open Tuesday thru Sunday from 10 a.m. to 5 p.m. For more information on Jazzed! or admission and schedules, call 212-721-1223.

The five finalists are:

Christian Sands (24) is from New York and is a protege of Dr. Billy Taylor, a member of the Christian McBride Trio and a two-time Grammy Award nominee.

Kris Bowers (25) is from Los Angeles and was the winner of the 2011 Thelonious Monk International Jazz Piano Competition. He has performed with Aretha Franklin, Marcus Miller and Q-Tip.

Sullivan Fortner (27) is from New Orleans and was under the tutelage of Jason Moran and David Liebman at the Manhattan School of Music. He is a member of the Roy Hargrove Quintet and has played with Theo Croker.

Zach Lapidus is from Indianapolis and has performed with Wycliffe Gordon and Maurice Brown.

Instruments made by children

Emmet Cohen (23) is from Miami and was a finalist in the 2011 Thelonious Monk Competition. He has played with Christian McBride, Billy Hart and Joshua Redman.

Their exercise for the evening was to select a piece of artwork from the museum and perform an improvisation, followed by a Cole Porter tune.

It was somewhat ironic that of the five finalists, not one young lady made the cut. Even though, as noted, the competition is extremely tight, there must be one young Mary Lou Williams or Geri Allen with smoking keys on the horizon. Previous winners include Aaron Diehl, Dan Tepfer and Aaron Parks.

The prize, valued at $100,000, includes a $50,000 cash prize, a recording contract with Mack Avenue Records and career assistance and engagement for two years. The finalists will compete September 2014-March 20, 2015, in Indianapolis.

Most of these young pianists are performing around Gotham, so keep a look out; they are all worth seeing.

June 1 marks the final performance for the Abyssinian Jazz Vespers series, featuring the Steven Kroon Latin Jazz Sextet. The vespers end on the first day of Black Music Month, which is fitting for Kroon, because his music ignites the strong connection between Latin jazz and its African roots.

As a leading percussionist in the city, Kroon put in over 10 years with the legendary balladeer Luther Vandross and had a lengthy stint with noted bassist, composer and arranger Ron Carter. Having played with Vandross, it’s clear that Kroon can play a ballad, which isn’t easy for percussionists.

He has a soft touch, and the sign of a good percussionist is their ability to be understated and mellow. With Carter, the percussionist moved in a straight-ahead jazz vein, keeping it swinging but never loud.

On his latest CD “On The #1” (Kroonatune Records), he is swinging on “Phantom of the Island,” a tune by pianist George Cables. He has that Latin hypnotic flow swinging with vibraphonist Bryan Carrott, a jaunting conversation between the two.

Kroon gives the lead to Carrott on “As Time Goes By,” which is yet another take on the traveled ballad. This time, it encompasses good phrasing and intuitive movement with the entire band. Kroon’s special guest will be the vocalist Carla Cook.

Abyssinian Baptist Church is located on 138th Street between Seventh and Lenox avenues. The performance will take place at 4 p.m.-6 p.m.

This year’s series proved to be one of the best Sunday jazz series in New York, featuring a host of top talent at an affordable price and at an appropriate time when senior citizens could come out and enjoy the music.