Claudia Jones was to the left of Karl Marx 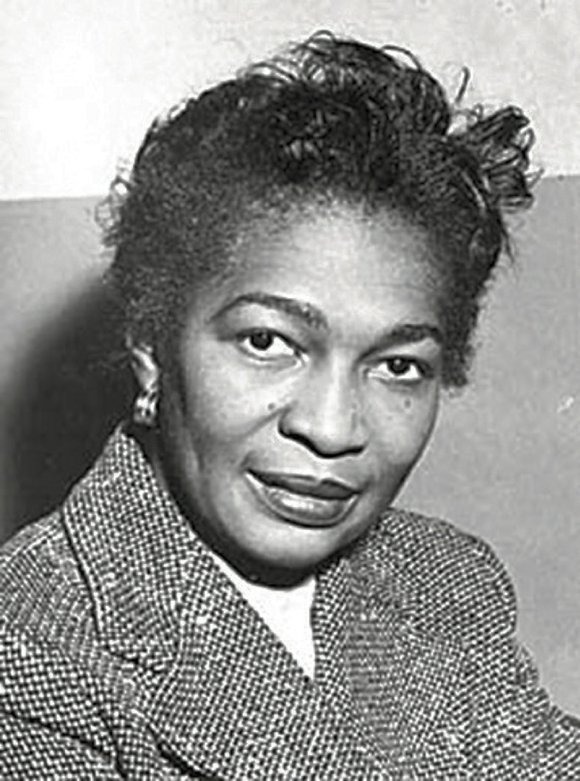 Other than its location between two community landmarks—the Johnny Hartman Plaza, in honor of the gorgeous-voiced jazz singer who lived in the neighborhood, and the Frank White Garden, named for a man who was shot and killed while protecting a youth facility—there’s very little to distinguish 504 143rd St. between Hamilton Place and Broadway. But there was a time back in the late 1940s when a notable revolutionary lived here, and where other than a nice green awning over the entryway, a plaque should be placed in tribute to their dedication to civil and human rights.

Find out more: Neither Carolyn Boyce Davies’ or Marika Sherwood’s biographies were cited above, but they are essential in deciphering the complexity of Jones’ remarkable life. It will also be helpful to read some of Jones’ articles..

Discussion: Several troubling aspects of Jones’ life are mentioned, and none more important than the ramifications of the Smith Act. The Cold War, witch hunts and the Joseph McCarthy-led House Un-American Activities Committee are related subjects that will broaden an understanding of this era of American history.

Place in context: Jones was born in Trinidad and died in England. In fact, she’s buried right next to Karl Marx, and that juxtaposition is something to consider given their differences in race, sex and the generations in which they struggled.

In his autobiography, which was completed by his daughter, Wendy Johnson, Howard “Stretch” Johnson recalls his return from the military and resuming his contact with his radical comrades. “My first contact with the [Communist] Party, on my release from the Army, was through Claudia Jones. Claudia had moved into the apartment on the sixth floor in the same building on 143rd Street that Martha [Johnson, his wife] had found to share with Carmen Alves while Bert Alves and I were doing our patriotic duty in the military service.”

Any one of the personalities mentioned above warrant more than a passing nod, but Jones is the subject of the moment in the same way she was throughout the Cold War period, during which time individuals who expressed a notion of radicalism, particularly in association with the Communist Party, were targeted.

Tracking down Jones through the typical encyclopedia of African-American history is futile. Rarely is she even a footnote in Black history books, unless they are about leftist politics and leaders such as Paul Robeson, Henry Winston, William Patterson, Ben Davis and Angelo Herndon. And even on these occasions, she seems to be added merely to provide gender balance to the menace unleashed by the House Un-American Activities Committee or the witch hunts of the McCarthy era.

Jones was born (nee Cumberbatch) on Feb. 21, 1915, in Port of Spain, Trinidad. She was still very young when she arrived in Harlem with her parents in the 1920s. Her mother died from overwork when Jones was 12. By the time she was 18 and still recovering from a bout of tuberculosis, she became a member of the Young Communist League, though there are few details available to show this political development. Obviously, she was very politically astute and a skillful organizer and writer because within months, she became the editor of the League’s Weekly Review and the Spotlight, according to professor Robin Kelley in his profile of her in the Encyclopedia of the American Left.

Kelley notes that Jones was among the leaders of the Party during its popular front days and was an active supporter of the National Negro Congress. As a member of its youth council in Harlem, she was a tireless advocate of the organization’s attempt to meld its more revolutionary politics with church groups and the labor movement.

During World War II, according to Kelley, “Jones developed a reputation as a relentless critic of male chauvinism and a leading Party spokesperson for women’s rights. After the war, she was appointed to the Women’s Commission, briefly serving as its secretary.”

May 25, 1926: Miles Davis, the great jazz innovator, is born on this date in Alton, Ill. On Monday, Memorial Day, in New York City, 77th Street at Broadway was named “Miles Davis Way.”

May 26, 1956: Tennis immortal Althea Gibson wins the French Open on this date, and it’s the first major tournament win for a Black woman.

May 27, 1873: Elijah McCoy, who patented so many inventions that he fostered the concept of “the real McCoy,” introduces his signature invention, the lubricating cup, on this date.

Jones, like so many other members of the Communist Party, was a victim of the notorious Smith Act that was passed in 1940 to prosecute anyone charged with the overthrow of the American government. In 1948, Jones was arrested and jailed for six months. She was confined to the Ellis Island detention facility, which exacerbated her fragile physical condition. During this phase of repression, she was represented by attorney George Crockett Jr. from Detroit, who would later become a judge and a congressman. In 1951, she was charged with violating the Smith Act and indicted along with other prominent members of the Party, including Elizabeth Gurley Flynn and James Jackson.

After her appeal was rejected by the U.S. Supreme Court, she was sent to the women’s federal prison in Virginia, where she suffered a heart attack. A national crusade to liberate her proved successful, and she was released in the fall of that year. Then, because she wasn’t a citizen, she was deported to England.

Despite her physical ailments, the intrepid Jones wasted no time getting involved in the social and political issues that impacted the West Indian community in England, specifically in London. Among her activities, she published the West Indian Gazette and helped to initiate the annual Caribbean Carnival in London.

Jones retained her international contacts through travel to the Soviet Union and China, writing and speaking with the same spirit and purpose that had motivated her during her activism in America.

“She was a seasoned campaigner who had won the support and admiration of such towering characters as W.E.B. Du Bois and Paul Robeson,” wrote Donald Hinds, who worked with Jones at the Gazette for several years, “During those months from late summer to the autumn of 1958, the Gazette‘s office did more business meeting worried Blacks than did the Migrants’ Service Department. As we went into 1959, politicians from what was referred to as the ‘British Caribbean’ were seen going up those stairs to talk to Claudia or she was invited to their hotels. Some of those whom she met were Norman Manley of Jamaica, Eric Williams of Trinidad and Tobago, Cheddi Jagan of British Guiana, Phyllis Allfrey and Carl La Corbinière of the ailing West Indian Federation.”

Jones died on Christmas Day, 1964. Visitors to Highgate Cemetery outside London will find her resting eternally in a gravesite, quite fittingly, right next to Karl Marx.