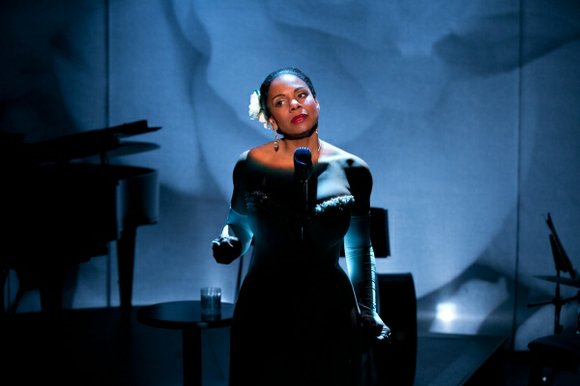 Greetings! As we wind down GBE African Liberation Month with farewells to the fallen,we open up Black Music Month with the official New York City naming of “Miles Davis Way” and a block party celebration that featured legendary people, including Herbie Hancock, Davis’ former wife and acting icon Cicely Tyson and many more luminaries. He will always be “Miles ahead.”

“After Midnight” celebrates Harlem’s golden age and the timeless songs of Duke Ellington, Cab Calloway and Harold Arlen, all woven around the prose of Langston Hughes. Fantasia is back by popular demand! The music is by select Jazz at Lincoln Center All-Stars. Brooks Atkinson Theatre, 256 W. Fourth St. For information, call 212-719-4099 or visit brooksatkinsontheatre.com.

“Satchmo at the Waldorf” is the new play about Louis Armstrong, the man who invented jazz. It’s appropriate for audience members ages 14 and older due to strong language. It’s now playing at the Westside Theatre Upstairs, 407 W. 43rd St., between Ninth and 10th avenues. For more information, call 212-239-6200 or visit www.satchmonyc.com.

B.B. King Blues Club presents my discovery, the multitalented Angela Winbush, on Friday, May 30 and the dynamic Sheila E on Saturday, May 31. For more information, visit bbkingsblues.com.

Tamar Braxton’s “Love and War” tour is coming to Newark Symphony Hall in New Jersey on Saturday, May 31 at 8 p.m. Also coming on Saturday, June 14 is A Father’s Day Gospel Celebration in the Sarah Vaughan Concert Hall, featuring Richard Smallwood’ Total Praise, I Love the Lord; Anthony Brown & Group Therapy; Testimony and many more! Doors open at 6 p.m. and the concert is at 7 p.m. It will be hosted by Liz Black of WLIB/WBLS. Tickets are available through the Newark Symphony Hall box office (1030 Broad St., Newark) by calling 973-643-8014 or through Ticketmaster by calling 800-745-3000 or visiting Ticketmaster.com.

The world-famous Apollo Theater announces that their 2014 annual spring gala will be held in honor of the storied theater’s 80th anniversary on Tuesday, June 10 at 7 p.m. The evening will include special award presentations and tribute performances by the music industry’s biggest artists, including Gladys Knight, Smokey Robinson, Natalie Cole, the Isley Brothers and more. It will be hosted by Emmy Award-winning and Grammy-nominated entertainer Wayne Brady. For tickets and information, call 212-531-5305, visit the Apollo Theater box office (253 W. 125th St.) or visit www.apollotheater.org.

Brothers, sisters, comrades and friends are all invited to “Retracing the Steps” a morning walk through Harlem tracing the history of the late Elombe Brath, Pan-African freedom fighter and founding leader of the December 12th Movement. The walk will take place on Saturday, May 31 at 8 a.m. at the Adam Clayton Powell State Office Building and will end at Abyssinian Baptist Church (132 W. 138th St., between Adam Clayton Powell Jr. Boulevard and Lenox Avenue) at 9 a.m. before the doors open for the funeral service. For more information, call 718-398-1766.

The New York City Chapter of the National Action Network presents an Economic Empowerment Forum at the House of Justice (106 W. 145th St.) on Saturday, May 31 at 12:30 p.m.Come out and get information about banking, insurance and investment. To get there, take the A train to 145th Street.

Celebrate the 15-year anniversary of the Mama Foundation for the Arts on Tuesday, June 10 at 6 p.m. at St. Martin’s Cathedral (230 Lenox Ave.) with their second annual gala, a grand celebration of Harlem’s culture and community. Proceeds benefit the Mama Foundation for the Arts Education programs to promote the history and fundamentals of African-American music. For donation information, call 212-280-1045 or visit mamafoundation.org.