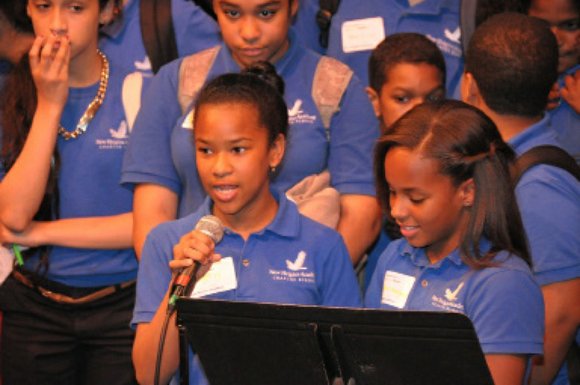 Imagine a version of “Macbeth” set in Haiti with an all-Black, 137-member cast of actors, dancers and drummers. It sounds like a modern Broadway hit, but it’s actually a production that took place at Harlem’s famed Lafayette Theatre in 1936.

That’s just one bit of interesting information gleaned from the “harlem is … THEATER” exhibition that is currently on display in Aaron Davis Hall at the City College Center for the Arts. The exhibition features diligently researched facts and photographs on a series of posterboards that highlight Black theater (with an emphasis on Harlem) from 1821 to the present.

Produced by Community Works, “harlem is … THEATER” is on a yearlong tour to various cultural institutions around the city. “As the Harlem community continues to change, it is critically important that the countless contributions and the artistic voices of this community be recognized, honored and preserved not only in Harlem itself, but throughout New York City,” said Community Works founder Barbara Horowitz.

During an opening reception for the exhibition, sixth-graders from the New Heights Charter Academy gave a brief, adorable presentation about what they have been learning about Black theater, and there was a special tribute to the late Tunde Samuel performed by actor/poet/playwright Daniel Carlton and flautist/composer Claudia Hayden.

Speaking on the importance of knowing history, Lythcott recalled a saying her mother, the late Barbara Ann Teer, often reinforced. “If you know the beginning, the end will not trouble you,” said Lythcott.

“We have to acknowledge our own shortcomings, and we have to evolve. Some hard things have to happen in order to sustain ourselves and sustain our stories. We have to make sure we don’t get appropriated,” said Jones.

Adkins noted the need to have intergenerational support, especially from the older, more established Black theater companies. The incomparable Vy Higginsen, who was in the audience, addressed that concern and offered to meet with each of the panelists one-on-one.

Many—young and old—voiced their concerns, hopes and suggestions for the future of Black theater. The additional stops on the city-wide, yearlong tour promise to offer more insights and further opportunity for dialogue.

“Harlem is … THEATER” is on display at Aaron Davis Hall now through June 30. For more information about the exhibit and tour locations and dates, visit http://www.communityworksnyc.org.