NYC: Beyond the ‘Apple’ of your eye 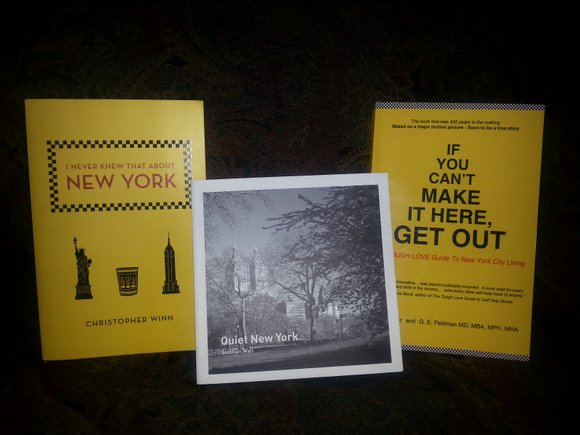 Among the latest books written about New York, these three delve into some of the city’s unknown facts, the quiet side of New York and, for residents, how to take it or leave it.

New York City is on a literary roll as of late. As one of the most fascinating cities in the world, it has been the subject of countless articles, movies and documentaries, plays and more. Discovering New York City is like pulling back the layers of an onion—the deeper you go, the more richness and flavor you find.

Books about the Big Apple run the gamut, covering every aspect of the city, from easy guides to visual celebrations, historic landmarks to famous residents, intimate portraits to kid adventures and everything in between. Three of the latest books delve into some of the city’s unknown facts, the quiet side and, for residents—how to take it or leave it. So whether you’re a native, a transplant or just a tourist passing through, you’re sure to discover an abundance of heartwarming stories and surprising insights that make up all that is New York.

“I Never Knew That About New York”

It is only natural that a freelance writer who has written quiz questions for TV and collected trivia for over 20 years would come up with the best-selling “I Never Knew That About” book series.

In his latest book, “I Never Knew That About New York,” author Christopher Winn (who dedicates the book, in part, to “New Yorkers through and through”) divides Manhattan into 18 sections, each arranged as a walk—should one desire to embark upon them as such—and delves into each section’s history, development, monuments, character, neighborhood gems, tourist attractions and more that ultimately connect readers to the overall tale of the city as a whole. Another charming aspect is that it is peppered with black-and-white illustrations, which lend themselves to the creation of a very nostalgic, intimate experience of the city.

In the book, you’ll find the expected information, like the fact that the city was named “New Amsterdam” when founded in 1625, and that Grand Central Terminal is the largest railway station in the world. But did you also know that Columbus Circle is the point from which all official distances to and from the city are measured? Or that America’s most popular cookie, the Oreo, was invented in the early 1900s inside the original Chelsea Market, which still stands today? Or that the Cathedral of St. John the Divine is the largest church in the country? This is just a few of what are sure to be many tidbits that will make you say, “I never knew that about New York!”

Little vignettes like these about quaint cafes and restaurants in the city where one can enjoy a little slice of serenity are found throughout “Quiet New York.”

“I Never Knew That About New York” is available at Amazon.com.

I guess that saying, “Shhh, just listen” might be an apt way to introduce you to the “Quiet” series of books written by Siobhan Wall.

In “Quiet New York,” the author offers a completely different and unexpected take on a place so beloved for its cacophony of assaulting sights, sounds and smells, its brash personas, its estimated 8.3 million residents and 54 million visitors—all of which has earned New York City the moniker “The City That Never Sleeps.”

But then there is a peaceful, quiet side of the city, which Wall, who is also the author of “Quiet Paris,” “Quiet London” and “Quiet Amsterdam,” unveils by spotlighting over 150 hushed places dotted all over all five boroughs: graceful waterfront parks, intimate cafes, creative retail shops, boutique gallery spaces, inviting yoga studios, picturesque libraries, contemplative sanctuaries and others. The book has been described as a must-read to learn “where a weary tourist or a jaded native can breathe deep, relax and enjoy a side of the city that few know exist.”

OK, so it’s not the warmest welcome one might desire should they decide to embark upon a life in New York City. But the subtitle of the book, whose full title is “If You Can’t Make It Here, Get Out: The Tough Love Guide to New York City Living,” at least lets you know the authors’ intent was to give their readers a reality check.

Written by Janet Potter and G.E. Feldman, the book has earned rave reviews, with it being called flirty, scathing, hilarious, snarky, provocative, way beyond politically incorrect, an instant classic and “the best self-help book ever written,” just to name a few. In this guide, containing information on everything ranging from dating to health, money, hobbies and recreation—and even descriptions of the denizens who live here as “perfect, regular or irregular”—Potter and Feldman reveal all, tiptoe on the border of ridiculous and push every button; however, they do it all in a unique and engaging style that makes the book hard to put down, even if you wholeheartedly disagree with their viewpoints.

As folks who have lived in New York City for most of their adult lives, they say that they have been “unemployed, unloved, undecided, unbowed, unmedicated, unmotivated and unwanted at one time or another, or all at the same time.” They say that every New Yorker, regardless of their station in life, struggles under unpredictable circumstances, “while soldiering on against potholes, noise wars, malignant traffic, bad karma, financial anxiety, emotional uncertainty, and housing and employment insecurity, all the while defending truth, justice, and the Northeast American way.”

“If You Can’t Make It Here, Get Out” is available at Amazon.com.

Lysa Allman-Baldwin writes for numerous online and print publications, including as the cultural travel writer for www.Examiner.com and as a senior travel writer for SoulOfAmerica.com, an Afrocentric travel website. Lysa can be reached at lallmanbaldwin@kc.rr.com