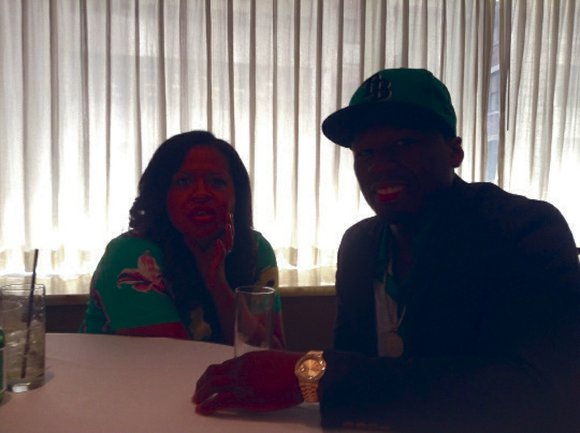 On June 7 at 9 p.m. EST/PST, the new series “Power” premieres on Starz, and it’s going to be a Twitter favorite once the first episode breaks; good news the network will have seven more ready to follow it.

The gritty look at wealth and the people at the tippy-top—those getting rich in the dark—comes from Executive Producer Curtis “50 Cent” Jackson and Emmy-nominated show creator Courtney Kemp Agboh (“The Good Wife”). Agboh is a television phenomenon almost as rare as a rose-tinted unicorn—an African-American show runner.

“Power” is described as a visionary crime drama that’s set in two different worlds, one populated by the New York City’s uber-rich and the other by the brutal drug trade, where cleaning money is as serious and dangerous as making it.

Here’s the story. James “Ghost” St. Patrick (Omari Hardwick) has it all: a stunning and smart wife, a chic Manhattan penthouse and the hottest, up-and-coming nightclub in New York, Truth.

His partner and best friend from the hood, Tommy (stunningly played by newcomer Joseph Sikora) enjoys the more complicated parts of the job and craves power more than legitimacy.

Inside Truth, you’re someone or you’re not getting in. The club caters to the elite, the famous and infamous boldface names that run the city.

As Truth’s success grows, and the triple digit profits pour in hourly, the only complication is that it’s a front for Ghost’s lucrative drug network.

The question’s on the table for Ghost: a legitimate life or the dark side?

Omari Hardwick and Joseph Sikora (Tommy) are joined by a superlative cast, including Naturi Naughton as Tasha St. Patrick, wife, confidant and willing accomplice, and Lela Loren as Angela Valdes, an old flame of Ghost’s who unexpectedly re-enters his life.

The other powerhouse creatives behind the compelling series include Mark Canton (“300”), Randall Emmett (“Lone Survior”) and David Knoller (“Big Love”), who also serve as executive producers. The series is being produced in association with CBS Television Studios.

Creator Agboh will serve as executive producer and show-runner.

“This is a real story,” stated multimillionaire executive producer Jackson. “It’s not easy for people who know the ways of the streets not to become a part of the streets. There is a night club, church and a liquor store on every corner in our neighborhoods. The ads showing the rich life and all the trappings most living there can’t afford—it’s everywhere. People start to want the riches, too, to dress in the labels. Desires rise. Decisions have to be made. That’s Ghost’s life. That’s his reality, and the people that know ‘him’ don’t know ‘him.’ And those that really know ‘him’—it’s a small circle for a reason.”

Agboh (“The Good Wife”) continues to share in the shaping of the new drama and the rich characters who make the story of “Power” so riveting.

“It was important to us to maintain authenticity,” shared Agboh. “I’m especially proud of how receptive the executives where in keeping Curtis’ … and my vision in tact. In a rare move, they insisted that I leave my original opening just as I had written it—no changes—and in the world of TV, that’s very rare.”

Next week there will be an informative and eye-opening chat with Jackson, whose net worth was recently estimated at $270 million, creator Agboh and leads Hardwick and the exceptional Sikora.