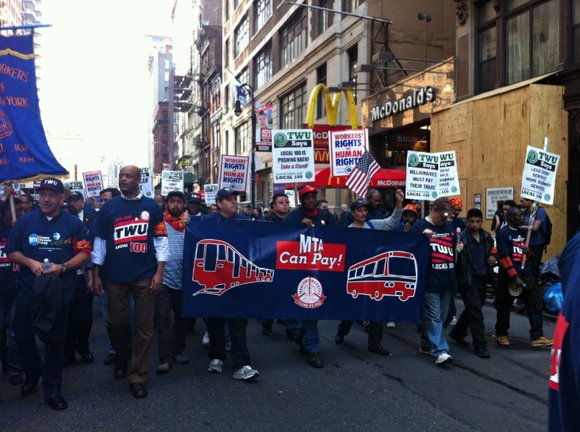 With 82 percent of the vote, 12,458 union members voted in favor of the contract in a landslide. The union’s been working without a contract since Jan. 15, 2012.

“At a time when few workers see their paychecks growing, with a recovery that fails to take hold for so many, transit workers can hold their heads high by having won raises in every year of the five-year deal, resulting in an immediate 4 percent wage increase, full retroactive pay and new benefits that reverse the trend of givebacks in health care that are all too familiar across our country,” said TWU Local 100 President John Samuelsen during a news conference in Brooklyn.

Under the agreement, TWU workers receive increases within the 2 percent cap that New York state Gov. Andrew Cuomo achieved with state labor contracts (1 percent increase in each of the first two years, beginning with 2012, and 2 percent increases in the last 3 years). Employees will pay an increased share of health care costs—increasing from 1.5 percent to 2 percent of the employee’s salary—but will receive new benefits, including paid maternity/paternity leave, coverage of health care for surviving spouses of deceased TWU retirees and improvements to dental and optical benefits.

Last month, Metropolitan Transit Authority (MTA) Chairman Tom Prendergast praised Cuomo for getting both TWU and the MTA on board for a new deal.

“Once again over the course of Gov. Cuomo’s three years in office, he has provided timely support to the MTA, this time helping to finalize a fair and responsible contract, just as he has given us consistent increases in the MTA operating budget,” said Prendergast in a statement. “The MTA finances are always our foremost concern, and this contract is a responsible one that acknowledges and reflects the MTA’s budget and projected budgets. I thank John Samuelsen, the leader of TWU Local 100 and a longtime colleague of mine at the MTA, for his partnership throughout this process.”

Samuelsen wanted to thank his union and Cuomo for his work as well.

“I want to thank the members of TWU Local 100 for recognizing that we achieved an excellent contract in trying times,” said Samuelsen. “I also want to thank Gov. Cuomo for his intervention, at the union’s request, that resulted in an acceptable contract.”