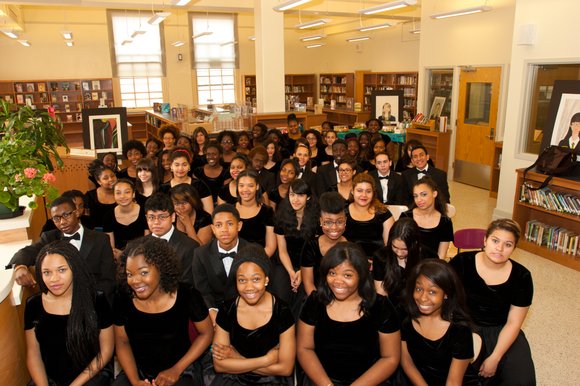 As Harlem’s Wadleigh Secondary School for the Performing and Visual Arts continues on its path to progress after a threat of closure last year, the school recently opened its newly remodeled library.

The eight-month project was part of the ongoing effort to turn the school around after it was almost shut down by former Mayor Michael Bloomberg. The transformation includes the adoption of new technology and educational resources to ensure that the students have the tools necessary to thrive in an increasingly technology-driven and global environment.

Friday’s program featured stirring musical performances by the Wadleigh choir and inspirational poetry readings by Wadleigh students. Former Wadleigh student Paul McIntosh, who graduated from the school in 1940, was recognized.

The new library will also be open to members of the surrounding community. The dedication was co-hosted by New York City Department of Education Community Education Secretary J. Conrad Fagan and Young Professional United for Change founder Brian Benjamin.

Under the leadership of Wadleigh Principal Tyee Chin and school librarian Paul McIntosh, academic performance and graduation rates are improving. Notably, the Wadleigh choir has performed at Carnegie Hall twice.

The much-needed renovation also comes with items students at the school need, including new computers, books and an array of educational resources.

The renovation of Wadleigh’s library is just one part of the school’s continuing effort to help its students. Benjamin has started a mentoring program in which figures from the arts and entertainment industry come to the school and speak to students about career options.