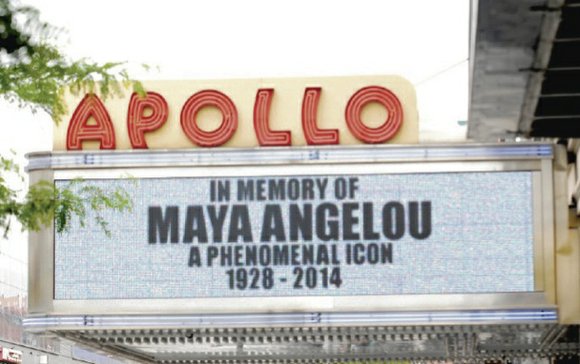 Hearts are breaking as the public absorbs the news that the majestic genius Dr. Maya Angelou made her transition on the morning of Wednesday, May 28, in her home in North Carolina. People on the street were stunned; even news anchors and cable and network talking heads caught a lump in their throats as they announced her passing. The literary world, the civil rights community and the grassroots movement are all grieving.

Angelou’s son, Guy B. Johnson, said that his mother “passed quietly in her home before 8:00 a.m. EST. Her family is extremely grateful that her ascension was not belabored by a loss of acuity or comprehension. She lived a life as a teacher, activist, artist and human being. She was a warrior for equality, tolerance and peace. The family is extremely appreciative of the time we had with her and we know that she is looking down upon us with love.”

“When her friend Nelson Mandela passed away last year, Maya Angelou wrote that ‘No sun outlasts its sunset, but will rise again, and bring the dawn,” said President Barack Obama. “Today, Michelle and I join millions around the world in remembering one of the brightest lights of our time—a brilliant writer, a fierce friend and a truly phenomenal woman. Over the course of her remarkable life, Maya was many things—an author, poet, civil rights activist, playwright, actress, director, composer, singer and dancer. But above all, she was a storyteller—and her greatest stories were true. A childhood of suffering and abuse actually drove her to stop speaking—but the voice she found helped generations of Americans find their rainbow amidst the clouds, and inspired the rest of us to be our best selves. In fact, she inspired my own mother to name my sister Maya.”

Obama continued, “Like so many others, Michelle and I will always cherish the time we were privileged to spend with Maya. With a kind word and a strong embrace, she had the ability to remind us that we are all God’s children, that we all have something to offer. And while Maya’s day may be done, we take comfort in knowing that her song will continue, ‘flung up to heaven’—and we celebrate the dawn that Maya Angelou helped bring.”

A grieving Oprah Winfrey said, “I’ve been blessed to have Maya Angelou as my mentor, mother/sister and friend since my 20s. She was there for me always, guiding me through some of the most important years of my life. The world knows her as a poet but at the heart of her, she was a teacher. ‘When you learn, teach. When you get, give’ is one of my best lessons from her.

“She won three Grammys, spoke six languages and was the second poet in history to recite a poem at a presidential inauguration. But what stands out to me most about Maya Angelou is not what she has done or written or spoken. It’s how she lived her life. She moved through the world with unshakeable calm, confidence and a fierce grace. I loved her and I know she loved me. I will profoundly miss her. She will always be the rainbow in my clouds.”

Public Advocate Letitia James said, “Maya Angelou was not only a world-renowned literary legend and [an] influential figure in the American Civil Rights movement, but an inspiration to countless African-Americans. Born disenfranchised, Dr. Angelou survived abuse, poverty, and loss. Her work spoke of the enduring spirit of people of African-descended peoples, specifically women.

Lorraine Miller, Interim NAACP President and CEO said, “The world will miss the indomitable spirit and immeasurable brilliance of Maya Angelou. She was a literary genius and a civil rights activist who will be celebrated for years to come. I had the privilege of working with Dr. Angelou during my time with the Clinton administration and found her to be a loving and caring woman. More than simply a renowned poet, novelist and actress, Dr. Angelou was a pioneer, a jewel of a person and a force to be reckoned with. Her humor and wit will be sorely missed.”

In a joint statement Mayor Bill de Blasio and Chirlane McCray said, “Along with so many New Yorkers, we were saddened to learn of Maya Angelou’s passing. Literature has lost one of its greatest voices, the civil rights movement has lost one of its staunchest activists and the world has lost a woman whose fierce compassion will shape our lives for generations to come.”

Former City Council Member Charles Barron and current City Council Member Inez Barron told the AmNews,“We lost an icon to say the least. We have lost a powerful spirit that motivated us to be dignified in our struggle. We will always remember a picture of her and Amiri Baraka dancing. Two giants in our movement for our liberation. Rest in peace Sister, as you join Harriet Tubman, Sojourner Truth, Betty Shabazz, and Corretta Scott King—and cut a rug with Brother Amiri Baraka.”

The renowned, Harlem-based cultural advocate Nana Camille Yarbrough said, “I heard she was weakening but I was not ready for her fall, for her absence [or] for her silence. I stumbled at the news. I know the brilliance of her words and of her spiritual light that so redirected us all toward our better selves. That will never die. Thank you Mother Maya.”

“Maya Angelou was the quintessential renaissance woman of the 20th century art and human rights movements,” said Reverend Al Sharpton, President of the National Action Network. “Not only was she a literary icon, [but] she was one of the few that turned her words into action. Although she participated in civil rights rallies, she challenged leaders of the civil rights movement to embrace the struggles of others and a broader view of freedom fighting. She challenged misogyny in the movement and was our poet, conscience, teacher and corrector. She was one of the few people whose presence you felt in the room even if she didn’t say a word. Her spirit was incomparable.”

“She was a woman of great resilience, courage and virtue,” recalled Min. Abdul Hafeez Muhammad, head of Harlem’s Muhammad Mosque Number 7. “We are forever thankful for her support of the Million Man March and Min. [Louis] Farrakhan and all that that she has done from a literary perspective to uplift us, inspire and encourage us and to motivate us. We thank God for the blessed life of Maya Angelou.”

“I cannot imagine the planet without Maya’s voice and spirit,” mourned author and mental health activist Terrie M. Williams. “Dear Maya’s suffering has gracefully ended. She turned her painful journey in life into lessons for us all and helped us to understand that we were not—and are not—alone. Her example was that, by the grace of God, we can still stand. She lived and left a legacy that is forever. It was Maya’s ‘I Know Why The Caged Bird Sings’ that made me fall in love with words and understand that the sharing of our common experiences heal us.”

Congressman Charles B. Rangel said, “I am deeply saddened by the loss of Harlem’s own Dr. Maya Angelou—a ‘Woman Phenomenally’ and a ‘Phenomenal Woman.’ Her infinite wisdom and knowledge, which she bravely shared with the world, will be forever treasured in our hearts and memories, [and] she will be greatly missed.

“I remember with great pride and joy when she was selected to read her poem at the inauguration of President Bill Clinton in 1993. The nation was moved [by] the poignancy of her words as she offered a renewed hope in mankind and stressed the links between all people. Dr. Maya Angelou was definitely one of the most important figures in the past century of American history. She was a dedicated teacher, using her experiences in the Jim Crow South to spark national dialogue on racism, equality and forgiveness [and] teaching us that ‘no one of us can be free until everybody is free.’ She was a selfless activist, fighting for the rights of those who were silenced. She was honest and bold, daring to tell her story to the world in hopes that it would inspire and motivate.”

Gov. Andrew Cuomo added, “Today we mourn the passing and celebrate the legacy of Dr. Maya Angelou, whose voice, passion, and life has left a lasting influence on our state and nation. Dr. Angelou was deeply involved in our nation’s Civil Rights movement and spent her life helping ensure that dignity, respect and opportunity were extended to all men and women. Dr. Angelou always considered New York City—especially Harlem—to be her second home. That is why we in New York State are so honored to have her personal papers housed at Harlem’s Schomburg Center for Research in Black Culture. On behalf of all New Yorkers, I send my condolences to her loved ones.”

Rapper and actor Common, who featured Dr. Angelou on his album “The Dreamer, The Believer,” said, “I was thinking about her lately. God bless the soul of one of my heroes, Dr Maya Angelou.”

“I believe that putting pen to paper and writing our thoughts and experiences in poems and stories gives the writer immortality,” said Julia D. Shaw, powerful literary and cultural advocate, and PR consultant. “Every time we read one of Maya’s poems or open one of her books she lives again in our minds and hearts. I was blessed to have met Maya Angelou and hear her speak at a women’s conference many years ago. It was a historic memory I will always treasure.”