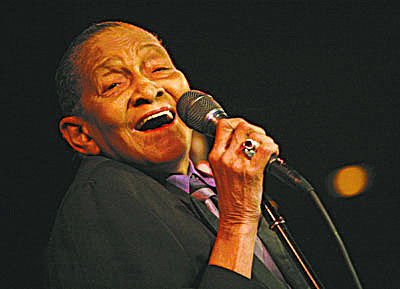 He was called “Little Jimmy Scott,” but his heart was that of a giant. His voice was so mesmerizing that the angels gave a cheer after every song. His singing was ignited by his body and soul, making every performance an unforgettable moment.

When Scott died June 12 at the age of 88, he left behind a collection of work that will inspire generations to come. Recently, his devoted friends and musicians filled Harlem’s Abyssinian Baptist Church for a memorial celebrating his life. The afternoon service included a variety of speakers, with the Rev. Dr. Calvin O. Butts III opening the celebration by stating, “We are here to celebrate the life of Jimmy Scott, one of the legends of America’s only true classical music.”

Rep. Charles B. Rangel noted that he became a loyal Scott fan in the 1940s, when Scott began singing with Lionel Hampton’s band and they recorded that first hit record, “Everybody Is Somebody’s Fool.”

Lloyd Williams, president of the Greater Harlem Chamber of Commerce, reminisced about those years that Scott performed during Harlem Week. Record executive and producer Bill Bentley, who helped restart Scott’s career in 1992 with the album “All the Way,” noted, “He didn’t have to study the note—he was the note.”

Biographer David Ritz (“Faith in Time: The Jazz Life of Jimmy Scott”) spoke of his great times working with Scott. The daughter of Doc Pomus, Sharyn Felder, recounted the story of him singing at her father’s funeral, which resulted in Scott being signed to Sire Records by Seymour Stein.

Felder also recalled her father writing an open letter to the editor of Billboard magazine Sept. 21, 1987, in which Pomus chastised the record industry for neglecting a great talent such as Scott.

Wendy Oxenhorn, president of the Jazz Foundation of America, took time to give out a few awards, including one to Scott’s widow, Jeanie McCarthy, for her love and devotion to Scott and the jazz community.

The music for the afternoon was so spirited it felt like an uplifting gospel sermon, starting with Scott’s band the Jazz Impressions, with Gregoire Maret on harmonica, bassist Hilliard “Hill” Greene, pianist Alex Minasian, keyboardist Michael Kanan, Maret, saxophonist T.K. Blue and drummer Dwayne Broadnax. Pianist Randy Weston and Blue performed “The Healers,” which was a real healing experience.

Each singers’ selected song was a musical masterpiece that was sung with a love and sincerity that represented Scott as a great human being and musician. Sam Moore, part of the dynamic duo Sam and Dave, came with “Sometimes I Feel Like a Motherless Child.” New Orleans artist Davell Crawford sang “When Did You Leave Heaven,” and then jazz veteran Andy Bey sang “Embraceable You.” English singer Antony Hegarty laid it out with “Smile,” and R&B great Chuck Jackson sang “Any Day Now.” Dr. John closed with a warmhearted rendition of “My Buddy.”

Scott stopped performing in the 1970s and didn’t make any records between 1975 and 1990. He made a terrific comeback that lasted until a few years before he died. Just two years ago, he performed at Ginny’s Supper Club downstairs from Harlem’s Red Rooster.

The legendary singer received the 2007 NEA Jazz Master Award and the Kennedy Center’s “Jazz in Our Time” Living Legend Award, followed by the Lifetime Achievement Award from the Jazz Foundation of America in 2010. In 2013, he was inducted into the R&B Hall of Fame.

A diverse group of artists held him in high esteem, including Marvin Gaye, Frankie Valli, Nancy Wilson, Madonna, filmmaker David Lynch and Guns N’ Roses lead Axl Rose. Billie Holiday noted Scott was one of her favorite singers. Perhaps she heard that same haunting sound that was so strong in her vocals.

The celebration of Scott’s life was a moving experience filled with endearing love and compassion that sailed on every note Scott sang. As he noted, “I just do what I do, baby, and if they like it, that’s beautiful.”