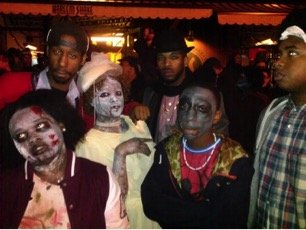 On Halloween night a “Thriller” flash-mob was held in front of the Harlem Shake restaurant on Lenox Avenue. Hundreds of people showed up to see the event. Many were in costume, others weren’t. All were wondering who among the large group was going to participate in the flash mob.

The Original Harlem Shakers, a dance group based in Harlem, were enlisted to participate in the Flash mob and the general public was invited to participate as well. Jaren Martin and Latrice Lord were also recruited for choreography and development of the dance routine.

The organizer of the event, Chet Whyne who has previously planned huge events and flash mobs in Harlem as the campaign director in Harlem for President Obama states, “It is important to bring people out for an endeavor that is fun. We did something similar last year, but I thought we had to do thriller justice this year. I always wanted to do thriller as a Harlem street experience with the Brownstones. I always wanted to do that. We also put together a total sound and visual experience”

A vacant building adjacent to the restaurant projected a huge display informing the public of the event. Congressman Charles B. Rangel and Inez Dickens, a member of the New York City Council were in attendance. Dickens kicked off the flash mob.

In addiction to the actual dance routine, there were fire dancers and a Michael Jackson completion. The child winner received $50 and free milkshakes for a month at Harlem Shake. The adult winner received a $500 gift basket. The event was immensely successful and proved to be fun for the attendees.

In regards to the outcome of the event Chet Whyne shared, “We planned for hundreds, but we didn’t plan for that many. Next year, I will move the venue and it will be even bigger”