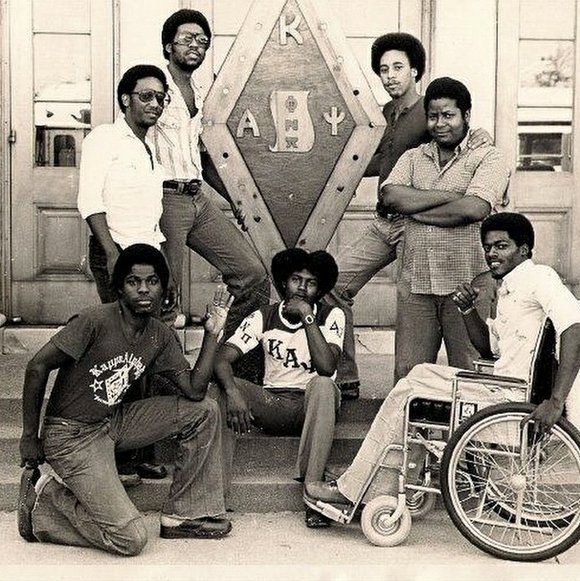 Jonathan Hicks (second right) and his fraternity brothers at the University of Missouri in 1978. Contributed

As the world mourns the recent passing of journalist Jonathan Hicks, readers remember him best for his writing and opinion on various topics.

However, Hicks is also being remembered as a dedicated and active fraternity brother. He was a life member of Kappa Alpha Psi.

Hicks died Monday at age 58 after battling pancreatic cancer. Condolences and tributes have been pouring in from members of Kappa Alpha Psi since his passing.

Initiated into the Black fraternity at the Delta Omega chapter at the University of Missouri in 1977, Hicks was known for his service to the fraternity spanning nearly 40 years.

Kappa Alpha Psi is currently in a period of mourning requiring all members to drape their fraternity pins and badges in black for the next 30 days. The practice is normally reserved only for the passing of national presidents of the fraternity. 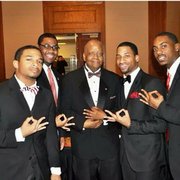 Jonathan Hicks with his fraternity brothers of Kappa Alpha Psi.

The fraternity’s mourning is also taking over social media. Members are posting pictures of Hicks with the hashtag #30daysofhickspics.

Kappa Alpha Psi Grand Polemarch, Randy Bates, Jr. Esq., said in an interview with the AmNews that Hicks deserved the honor because of his commitment to the organization.

“He was a great, compassionate and caring guy,” said Bates. “I knew him for almost 20 years and he was the editor of our publication, The Kappa Alpha Psi Journal.”

At the time of his death, Hicks was over the magazine about fraternity news and history distributed to all members of Kappa Alpha Psi around the world. Prior to his passing, Bates said Hicks had been grooming a replacement editor.

Hicks was also known in the fraternity for his singing. He recorded an album of songs traditionally sung by the fraternity and was often the featured vocalist at various fraternity events.

Bates said earlier this year, he and Hicks traveled to Germany together and that just over a month ago Hicks called him informing him about the state of his health.

“He called me to basically say goodbye and let me know that he appreciated the opportunity of being the general editor. He also said he appreciated the love from the brothers of the fraternity and that he had a fabulous life," Bates said.

In 2013, Hicks received one of the fraternity's highest honors, the Elder Watson Diggs Award, named after one of the founders of Kappa Alpha Psi.

Members of Kappa Alpha Psi are holding a special service open to the public during Hicks’ wake on November 14 at 7pm at Bethany Baptist Church in Brooklyn.