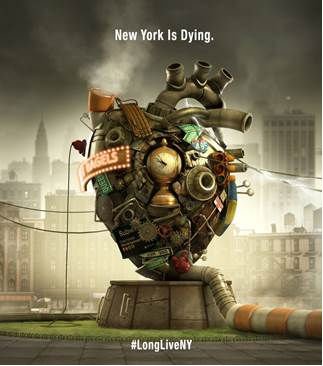 The New York Organ Donor Network hopes to attract more citizens to be organ donors with its latest campaign.

If you’ve been riding the subway and seen the photo above and asked yourself “What’s that?” you might be surprised to know the answer.

The work of art, which features various New York City artifacts in the form of a human heart, is the latest campaign by the New York Organ Donor Network (NYODN) aimed at getting Big Apple citizens to become organ donors.

NYODN unveiled their “Long Live New York” campaign in October. The marketing campaign is part of the continuing effort to increase the number of registered organ donors in the greater New York metropolitan area and surrounding counties. The centerpiece of the campaign is a 90-second animated short film created by Oscar-winning director Laurent Witz.

“The Long Live New York campaign is designed to tap into New York pride and sense of community to inspire New Yorkers to act on their positive feelings about organ donation, and register,” said James Pardes, NYODN Vice President of Marketing and Communications. “Just 23 percent of New Yorkers are registered donors, yet 83 percent support organ donation. This leaves New York 49th out of 50 states with regard to the percentage of residents registered as organ donors. For the 10,000 people waiting for a life-saving organ transplant in New York, we must do better, and we’re hopeful that this unique campaign will help.”

With help from advertising agency Y&R, since early September, unbranded posters in New York City subways have featured an illustration based on the film with the tagline “New York is Dying” and the hashtag #LongLiveNY. The posters were designed to generate buzz and intrigue in advance of the roll out.

Close to 90 percent of people become organ donors when they receive or renew their driver's license or state ID. However, the time period of the renewal cycle is eight years in New York State compared to shorter times in other states. This leads to people being asked less frequently if the want to be donors.

In an interview with the AmNews, NYODN President and CEO Helen Irving said the campaign is aimed at getting the word out about organ donation through social media.

“Social media is allowing people to find out who we are,” said Irving. “It’s really a call to action for people to become organ donors. New York lags behind when it comes to organ donation and we are not proud of that. New Yorkers take pride in being the best at everything.”

Irving added that while the campaign is a call out to all New Yorkers to become organ donors, NYODN wants to target 18-30 demographic. With young people using social media to get news and information, #LongLiveNY hopes to become viral.

While the “Long Live New York” campaign is for all New Yorkers, NYODN continues its effort to reach the African-American community.

“We have to do a better job of convincing African-Americans about the benefits of organ donation,” said Irving. “Many feel that they don’t have access to an organ transplant and that’s not true. There is also a stigma that doctors might not take care of them. People do have access to transplants.”

As the “Long Live New York” campaign continues, other elements include LongLiveNY.org, a new online hub designed to encourage New Yorkers to register to become organ donors and advocate for the cause, posters on Long Island Railroad and MetroNorth trains and a video spot that will air in local Department of Motor Vehicle offices. NYODN will also ramp up community outreach efforts with tabling events throughout the city.

The animated film can be seen on Facebook, Hulu and Say Media.

To register to be an organ donor, or to learn more about NYODN visit www.donatelifeny.org