Oliver and Cuyjet’s ‘BOOM!’: Third time is a charm 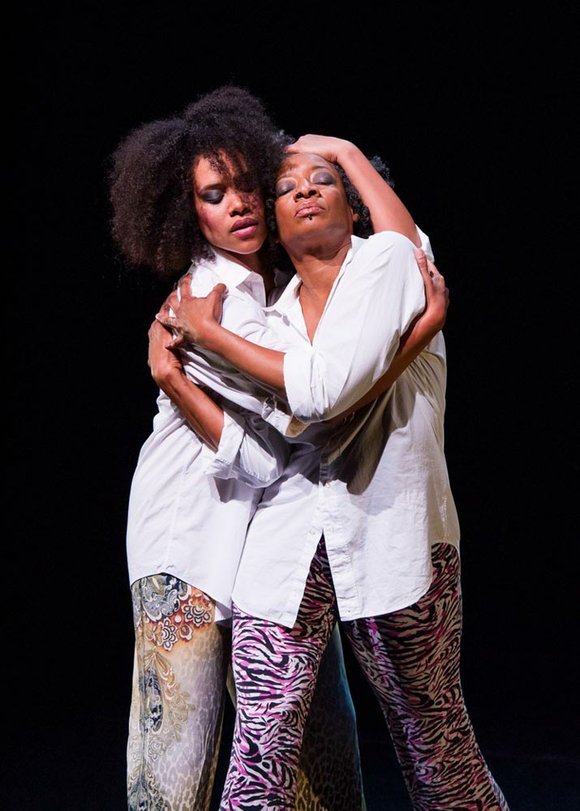 The declaratives kept coming: “I’mma punish ya … but, I’mmo give you hope.” The questions kept coming too: “Whatca gonna do if ...?” “How you gonna meditate ...?” The general response from the audience was guttural laughs and nods in agreement.

Versions of the work first appeared as part of Ishmael Jones’ “Parallel in Black Platform Series” at Danspace Project at St. Mark’s Church in 2012 and in 2013 at New York Live Arts. In this third, now longer iteration, Oliver and Cuyjet are ripe and ready.

To begin, in the dark, they burst through the same doors the audience used, and right then they get the attention they demand. For “BOOM!”, Oliver describes the duo as “individuals, friends, strangers, family, younger/older versions of themselves, negotiating relations that are persistently in flux.” Of the many personalities, they are hilarious, serious, contemplative, comforting and inseparable. We get real close to these “homegirls,” these “gurlfriends,” and all bets are off. Wat will they do next? So they share some real situations, and we intone agreement.

With legs and arms in the air, they make very fast hissing sounds as if in labor. On all fours, they crawl and challenge with rousing declaratives. While air sculpting their bodies, they mumble things like, “It’s the girth,” or with eyes closed tightly, they slip and intertwine their arms in an effort to get closer and closer yet. Then, for nearly three minutes, they pause. Nothing happens.

They are still in one corner, lit only by a shadowed light. Pause … pause … pause. Finally, a piercing scream from Oliver brings us back. To watch them move is to see not two, but one body—one body skillfully manipulating a chorus of gestures and refined shapes. These two differently shaped and experienced performers work well together.

In “BOOM!”, Oliver scores in her quest to embrace her own mission: to look at the “vulnerable, erroneously confident, humorous, ridiculous.” This dance must be marked down as a dance for everywoman, an anthem to declare and confirm female relationships and then some.