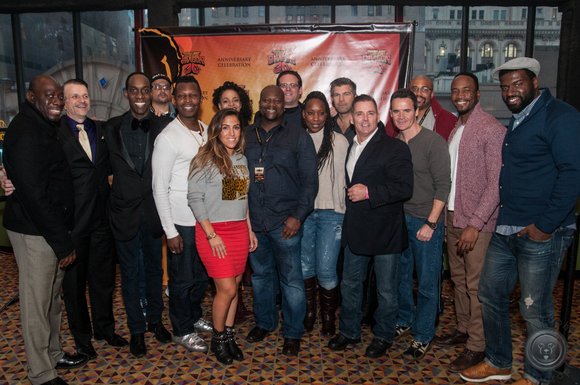 Saturday, Nov. 8 was the second annual Urban Action Showcase and Expo. Many came to see the 30th anniversary of the showing of “The Last Dragon,” featuring the urban star Taimak Guarriello as Bruce Leeroy. Everyone else came to see Tony Clomax’s “Broken Angels.”

Clomax has been in the film industry for seven years professionally. “I’ve been writing, directing, producing and editing for film professionally since 2007, when I graduated with my MFA in film from City College,” Clomax told the AmNews.

Asked how he first got involved with the industry, the dynamic filmmaker replied, “I did a certificate program at the New York Film Academy in 2000, then spent a year working as a production assistant on NYU and Columbia University student films. After that experience, I went back to work as an administrator at City College. Five years later, I started the MFA film program at City College, so I was a full-time employee and full-time graduate student. I graduated in 2007 and jumped headfirst into the freelance and indie world of film production.”

Before the “Broken Angels” film, Clomax has produced a plethora of work, ranging from documentaries such as “You Only Live Twice” and “Latina Breast Cancer Survivor,” to series such as “12-Step to Recovery” and “Disciplinary Actions.” Now he is adding “Broken Angels” to the list of films, which also includes “MBK: My Brother’s Keeper” and “Reflection of Evil.”

“Broken Angels” stars Jeremy Sample, a well-seasoned Hollywood stuntman, as the flawed African-American protagonist Bobby Cheeks, a contract killer for the mob, headed by Capo Dom Caligula, a feared man who earned his rep in the streets. The film focuses on the results of Cheeks crossing Caligula and drafting an old ally-turned-“frenemy,” Mike McKenzie, played by Marcus Taylor, to help him outlive his dire situation. The film gives a “Pulp Fiction” meets “Blood and Bone” vibe, and it’s jam-packed with MMA fight scenes so enticing it won the Expo’s “Best Fighting Scene” award. The film overall was very enjoyable, with witty punchlines by Bill Johnson’s character Snaps Calhoun, emulating those of Samuel Jackson’s Jules Winnfield.

Laughter was not the only response that the film received during the screening. During the 33-minute film, you could hear the crowd cheer for Bobby during his ups and encouraging him during his downs. When Clomax was asked what kind of responses he was hoping for, he answered, “I wanted to make a film that the audience would be inspired to participate in. Talking back to the screen, saying, ‘Uh’ and ‘Oh,’ laughing at some of the dialogue and cheering during the fight scenes.” The producer did just that.

The cast was predominately African-American and Latino. Said Clomax, “I want people to be inspired to create their own films, to see characters that look like them.” To make the film touch home, it was emotionally charged with racial interjections and epithets, including constant shots fired at half Italian and half Black Francesca Morro, played by Teniece Divya Johnson. Said Clomax, “That’s not something embraced in the Italian mob family … we also covered interracial dating. Nothing is off-limits!”

“Broken Angels,” a title that couldn’t be more fitting to what Clomax calls “his flawed heroes,” was screened while still in the post-production process. Clomax disclosed that future steps would include finishing the project and “sharing it with the world via film festivals and screenings.” After finishing “Broken Angels” and post-production on another of his films, he informed us that he will be taking a short hiatus to focus on writing, including “a TV pilot that [he] is writing with actress Kimberley Dalton Mitchell, which is loosely based on her childhood in North Carolina and [his] childhood in Chicago” It is titled “Here Comes the Daltons,” and it will be pitched in January. To keep up-to-date with the future projects and his screenings, follow him on Twitter @TonyClomax and on Facebook at www.facebook.com/tonyclomaxfanpage.