Taking a Stand Against Catcalling! 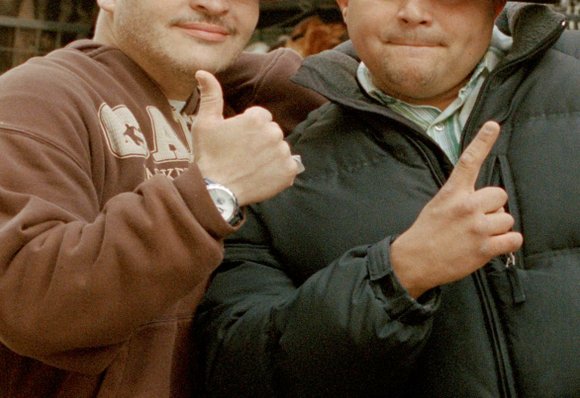 Q: What are some of the reactions you’ve gotten? How do you deal with them?

CT: I think it’s important to know that in New York City and mostly everywhere you don’t feel safe ever. There’s never a time when you feel totally safe. So in terms of my own safety, that’s something that I wasn’t necessarily concerned with because most of the photographs are during the day on busy streets so I felt like that’s even more safe than any other situation. The reactions themselves, it sort of depends, which is sort of interesting. Some men were encouraged by it and were like, “Wow this woman is giving me more attention,” which I understand is problematic. Ultimately, the work is problematic because to photograph someone is to respect them in a way and to photograph these men is a form of respect and I understand that’s the problem within that. But some men would cover their faces, some men would just run away. But I think it’s important for me that there is a consequence for their actions whether they were encouraged by it, they still realize, “Oh that woman has my picture after I did something,” because I often would tell them that it made me feel uncomfortable.

Men posing for the camera for Caroline Tompkins' Hey Baby project. via http://www.carolinetompkins.com/

Q: Have any of the men in your photographs tried to sue you for “damaging” their reputation?

CT: None of the men have contacted me or reached out whatsoever. So, we’ll see how the future goes in that regards.

Q: I noticed in some of the photographs some of the men exert this confidence, like they’re proud of doing that. How does that make you feel? (Good question!!)

CT: It’s ultimately like they were taught that and I think that’s the worst part. Like I said, I understand that it’s encouraging them in that respect and now I have that their pictures, I’ve been on news, you’re doing an interview with me and these pictures will be published. So there’s the accountability on their end that they now exist in the world in that context.

Q: Do you ever get scared that you’re putting your life on the line when confronting these men?

CT: None of them were very aggressive. Like I said, taking a picture of someone is kind of flattering so I think a lot of them were just kind of like, “Oh okay,” or, “Oh no.” But I think it’s when I started to confront them in terms of like, “That made me feel uncomfortable,” they would ask why I wanted to take their picture and I’d say, “Why not? You said this to me, why can’t I do that?” Sometimes they would say, “I didn’t rape you,” and me being like, “No you didn’t but it doesn’t matter.” Also, I feel like living in New York, every woman has a story of either being followed home, or being grabbed inappropriately, or something that you’ve already experienced so much living here, unfortunately. So I feel like photographing them isn’t a huge step in terms of my own safety.