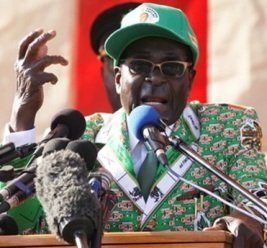 A follow-up forum conducted earlier this month by the December 12th Movement at Harlem’s UCLA—the University on the Corner of Lenox Avenue—discussed Zimbabwean President Robert Mugabe’s visit to New York City a couple months ago, where he addressed the 69th session of the United Nations General Assembly.

The forum explained how, during the African leader’s Sept. 25 presentation, he detailed the importance of his country and other self-determining African nations maintaining their sovereign status and continuing to be self-sufficient, as he advocates for them to shake off the shackles of their European colonizers.

His efforts were applauded by local activists who share similar sentiments.

“The president’s recent visit to the United Nations saw, once again, that as an African leader he has been the most consistent on the question of raising what is in the interest of Zimbabwe’s people in particular and African people in general,” commented December 12th Movement’s Brother Omowale Clay.

That day, Mugabe laid out future plans for the whole continent: “What will be important as the integration process deepens, especially among developing countries, is to ensure that specific challenges of landlocked and transit countries achieve particular attention in the interest of receiving balanced development throughout the region,” he said.

The 90-year-old African leader also mentioned the importance of developing the land for a productive future for its indigenous population. During his dissertation, he expressed optimism, regardless of the obstacles that lie ahead.

“In spite of the many challenges and constraints we face in implementing regional integration and transit cooperation programs, I am convinced that the ongoing activities will yield the desired results,” he explained. “The commitment and political wheels of our countries to see these efforts to fruition is unshakable. We urge our development partners to appreciate this determination and to join us in this quest for sustainable economic development in our countries and regions.”

Some say that the uncompromising African president’s self-empowering land reform policy has set a blueprint for the Motherland’s other 53 nations to follow if they desire to sever their ties to European imperialists.

“The real questions facing Africa is on the continued holding of its resources and attempts to re-colonize it, the continued efforts to station military troops on the African continent to carry out those policies,” contends Clay. “We as a sovereign people need to be in charge of our own resources, that the sanctions levied against Zimbabwe are illegal and represent an international hostile act, an act of aggression against the people of Zimbabwe.

“The message the president brought to the U.N., and continues to bring to the world community, is that Zimbabwe will never be a colony again, and that its independence is more vital than anything in terms of the people’s right to be self-determining.”