A look at the Ayotzinapa Crisis 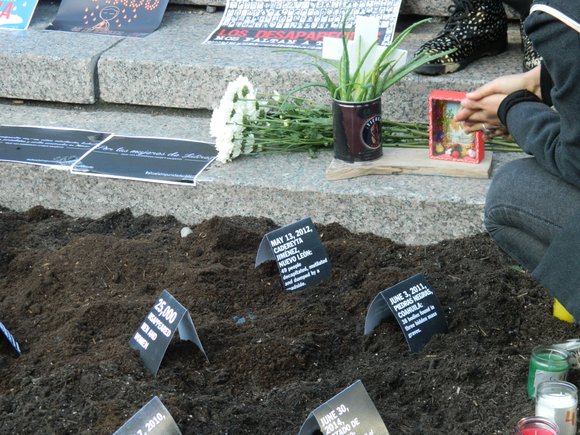 The brutality of police violence in the city of Iguala, in the Mexican state of Guerrero, that occurred in September 26th has gone largely under the radar in the United States. But an insistent group of protestors, including East Harlem residents, continue to make their voices heard in Manhattan to insure justice for the 43 disappeared students and the six people killed.

According to Thruth-Out, the students or normalistas from a small rural teachers’ college in Ayotzinapa, Guerrero, had planned a trip to Mexico City. Some barely out of childhood and all very young, the normalistas vanished after the police took them away in vans, and handed them to an organized crime group called Guerreros Unidos. As reported by the Daily Mail, municipal police acted under the orders of the mayor Jose Luis Abarca and his wife.

Global Voices later reported that after interrogations, the drug traffickers confessed having brought the victims to a garbage-dumb at gunpoint where they proceeded to murder and burn the youngsters later throwing the remains in garbage bags into a nearby river. An Argentinian forensic team, however, determined the content of the bag did not belonged to those of the students.

Crying out “vivos se los llevaron, vivos los queremos” [“you took them alive, we want them back alive,”] protestors in New York rally against the government’s disinterest and mishandling of the case. Beginning at 3pm and continuing well after 6pm, a crowd of protestors has gathered every Sunday. “Ayotzinapa vive, la lucha sigue” “Ayotzinapa lives on, the fight goes on,” chants the crowd lively in spite of the cold. From Ayotzinapa to the world, the fight will continue until the students return.

The remaining students made a video that shows images of the disappeared working hard in flower fields before the tragedy. Land plowing, root growing, flower planting, thought harvesting, the students’ legacy translated into one of the movements’ slogans: “they tried to bury us, little knowing we were seeds.”

Pay tribute to the normalistas’ spirit and join the ongoing struggle every Sunday at Union Square or reach out to the Harlem based organization Freedom Socialist Party working in conjunction with Radical Women and Yo Soy CientoTreinta y Dos for more ways to get involve.