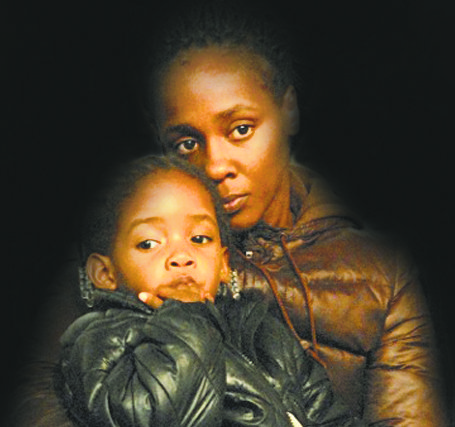 It was déjà vu all over again for Omowale Clay, the bullhorn in his hand as he marched behind Assemblyman-elect Charles Barron, who was at the front of demonstrators last Saturday evening in East New York, all of them outraged at the police for the shooting death of Akai Gurley.

“Whose streets?” Clay boomed as the marchers gathered outside the police station on Sutter and Alabama avenues. “Our streets!” came the familiar response from the crowd that included members of the Revolutionary Communist Party, the December 12th Movement, members of the Black Panther Party and residents of the Louis Pink Houses, where Gurley, 28, was shot by Officer Peter Liang, 27, in a darkened stairwell.

Sunday, the city medical examiner ruled the death a homicide. “The classification does not imply any statement about intent or culpability,” the examiner reported, “and as with all classifications made by OCME, the evaluation of legal implications of this classification is a function of the District Attorney and the criminal justice system.”

The speed with which the report was delivered, as well as the apologies from Police Commissioner Bill Bratton, may not be enough to stem the growing discontent from a community consistently upset by the misconduct of the NYPD.

“Arrest Peter Liang, and Commissioner Bratton’s got to go!” Barron roared, the crowd chanting along with him. Others were even more outspoken and angry as they pushed aside the metal restraining barriers, refusing to be corralled.

Earlier in the day, Kimberley Michelle Ballinger, the mother of Gurley’s daughter, Akaila, appeared at the National Action Network and met with the Rev. Al Sharpton, who compared Gurley’s death with the chokehold death of Eric Garner in July on Staten Island, which the grand jury is still evaluating.

“They are saying it was an accident,” Sharpton said. “We are saying, ‘How do we know until there is a thorough investigation?’”

Gurley, said several people familiar with him and the incident, was slated to take a job at the Housing Authority, which would have given him the means to take care of his daughter and her mother.

Because the officer has not given his version of what happened, pending the grand jury investigation and ruling, it is still rather murky exactly what happened, outside of what’s present in the police account. According to the NYPD, the two rookie officers were on a vertical patrol of the housing unit when they entered a darkened stairwell. Officer Liang had a flashlight in one hand and his gun in the other when he turned the knob of the door to enter the stairwell.

His gun “accidently” discharged, the police account continued, and the single shot either hit Gurley directly or ricocheted. He was coming down the stairs from two floors above with his girlfriend, Melissa Butler, after they grew tired of waiting for the elevator.

When she discovered he had been shot, she hurried to his side and then rushed to a neighbor to call 911 and the police. By then, the officers had come down the stairs to see what had happened.