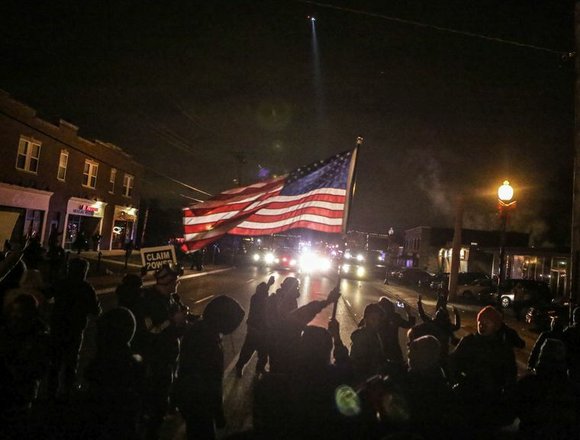 No Indictment! And things in Ferguson went from grand jury to grand fury.

No Indictment! Those were the last and most disappointing words the family of Michael Brown wanted to hear, but that was the decision of the grand jury Monday night in Clayton, Mo., delivered by St. Louis County Prosecutor Robert McCulloch.

“After their exhaustive review of the evidence, the grand jury deliberated over two days making their final decision,” McCulloch read in a slow monotone. “They determined that no probable cause exists to file any charge against Officer [Darren] Wilson.”

Even as he recounted the case, noting how the physical evidence contradicted many of the eyewitnesses, and indicating the inconsistency of the accounts by several witnesses, it was clear that the officer was not going to be indicted. What he corroborated was the feeling many protesters had after seeing Gov. Nixon’s deployment of the National Guard, and the revelation of further evidence supporting Wilson’s testimony.

“The physical and scientific evidence examined by the grand jury,” McCulloch continued during his 25-minute presentation, “combined with the witness statements, supported and substantiated by that physical evidence, tells the accurate and tragic story of what happened.”

During the question-and-answer session, he told reporters that the decision was unanimous from the 12 jurors, 7 men and 5 women; 9 whites and 3 Blacks. When asked about the actual count, he said that could not be disclosed.

Shortly after his exchanges with reporters, the various television stations covered President Obama’s remarks about the decision, and while he spoke, the demonstrators in Ferguson on the split screen were becoming angrier and angrier.

“We need to accept that this decision was the grand jury’s to make,” the president began. “There are Americans who agree with it, and there are American who are deeply upset, even angry. It’s an understandable reaction. But I join Michael’s parents in asking anyone who protests this decision to do so peacefully.”

That plea from the president and the Brown family was not obeyed. Obama wasn’t finished with his remarks when protesters began to hurl bricks at parked county police cars, breaking the windows and eventually torching one of them.

Reporters had to retreat from the billowing clouds from smoke bombs and tear gas cannisters, and there were reports of gunfire. And then came the conflagration; burning buildings lit up the night.

Attorney Benjamin Crump, representing the Brown family, told reporters that the family was very disappointed with the decision. “But they want positive change,” he said. “I believe that the grand jury proceedings are wrong. We need a special prosecutor and more transparency.” He said he agreed with the Brown family in their call for calm and their statement that “We are not here to be violent.”

Crump quoted Dr. Martin Luther King Jr., insisting that we should make a “difference” and act in “a dignified and disciplined way.”

Demonstrations occurred across the country, and after the decision, a crowd of protesters marched through New York City from Union Square, voicing their outrage about the decision not to indict the officer who, on August 9, fired 12 shots, six of them riddling the body of Michael Brown.

“From Ferguson to Brooklyn, the zip codes may be different but the issue of police officers shooting young, unarmed African-American men without justification is exactly the same,” said Rep. Hakeem Jeffries of Brooklyn and a member of the House Judiciary Committee. “Throughout this country, we need a dramatic change in the manner that law enforcement authorities engage communities of color.”

There is no word yet on whether the Brown family and their lawyers will seek a federal civil rights suit to get some measure of justice.

But Jeffries said that such an investigation should “take center stage, and do the right thing for the family of Michael Brown.”