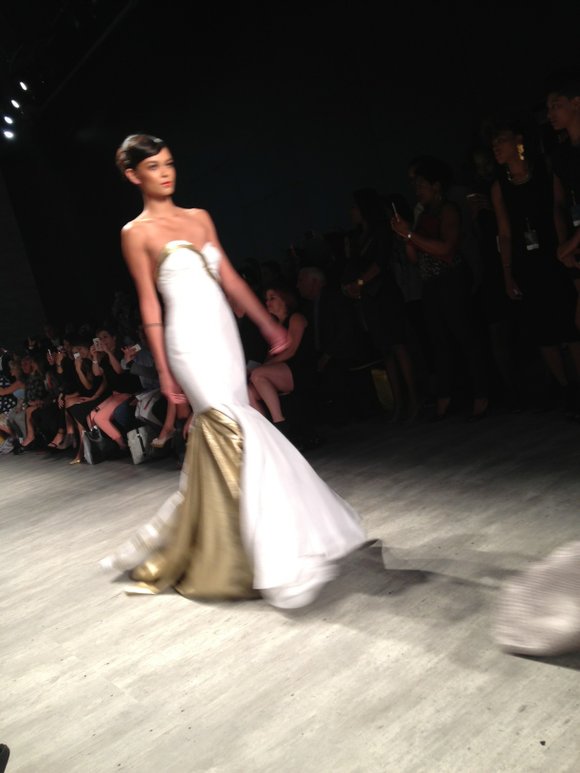 Spring/ Summer 2014 Designs by b michael Renee Minus White

When it comes to fashion design, no one told the story better than b michael. His show at the Mercedes-Benz Lincoln Center Fashion Week was an expose of his fashion journey. It opened with a video showing the audience how a fashion garment evolves. Beginning with the white threads, color, fabric, design, cutting and sewing, he shared the experience with images of himself totally involved in the process from beginning to end.

There’s no doubt that b michael was fated to be a fashion designer. He grew up in Durham, Conn., where he received his inspiration from his mother. She passed her creativity and keen sense of style to her son. Today, b michael AMERICA incorporates the fantastic with the understated cool, sensational color with elegance and emotion with design.

This former Wall Street account executive decided to pursue his creative side and launched a millinery line. Before his haute hat line, he worked for Oscar de la Renta and Louis Feraud. He has shown his collections in China and Korea. For the b michael AMERICA collection, he heightens his couture aesthetic by infusing emotions such as joy, adding a discernible feeling and festive mood to his creations. “It is a modern approach to glamour. It is also about achieving a very sophisticated yet simplistic look,” said b michael while describing his signature style.

At his spring 2015 show, b michael’s designs were absolutely stunning. Wide-legged pants are back. Silhouettes are curvy, accentuating a woman’s figure. For day, there are shirt dresses, sundresses and topper dresses with all the details, including fringed lace, extended waists, nipped waistlines and flare skirts. For day and evening, b michael sent 45 dramatic looks down the runway with the expert backstage assistance of Audrey Smaltz and the Ground Crew. The models were superb.

In details, there were button fronts, color blocking, petals, caplet backs, high necks and halter hits on the runway. You couldn’t help but notice the details on the back of his outfits, too. These outfits are great for making an entrance or an exit.

For men, he shows dapper styles featuring fitted suits, sporty blazers and trousers in summery colors. Floral prints are also shown in his collection. However, the focus here is all on the cuts, colors, designs and high-quality workmanship and American style. b michael’s shows always take you to Paris and remind you of haute couture and designers such as Balenciaga and Madame Gres. He keeps the best of yesterday’s fashion alive today. It’s all so delightful. His clothes are so wearable and so American in style.

b michael’s evening gowns are opulent. Think movie star glamour in strapless looks with trains and bustles to a fashion point. His show attracted a standing-room-only crowd. There were folks such as Norma Jean Darden, co-author of the “SpoonBread and Strawberry Wine” cookbook and owner of SpoonBread restaurant in New York; Sherry Bronfman; designer Phil Harris; and Rasheeda Wilson from Douglas Elliman’s Harlem office. They all enjoyed the show tremendously. b michael’s collections have garnered appreciative fans, including socialites and celebrities such as Cicely Tyson, Nancy Wilson, Lynn Whitefield, Tamara Tunie and Angela Basset.

“This collection continues my vision to create a genre of taste that is inspired by the art of advanced American style, from the shirt-dress to the red carpet. It’s back to the future,” stated the designer.