Kyle Abraham/Abraham.In.Motion: Bring on the abstract! 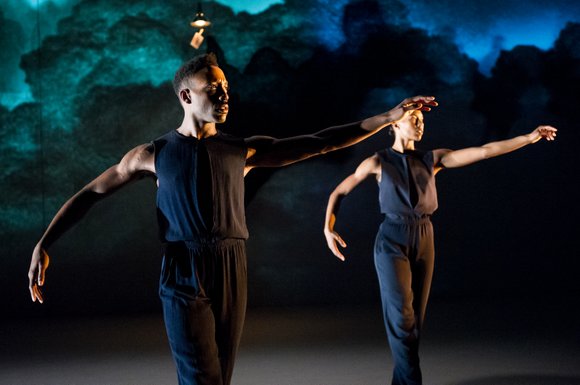 Kyle Abraham was given two years (2012-2015) through New York Live Art’s Resident Commissioned Artist Program to premiere “a new work … at NYLA,” according to the presenting organization. Abraham and his company had full-time rehearsal space, health benefits, an office, a substantial commission and full-time salary.

The expected single new work turned into four. The works were then presented on two separate programs: “The Watershed” was an evening-length work, and on another evening, there were three, “When the Wolves Came In,” “Hallowed and “The Getting.” Both programs draw inspiration from jazz legend Max Roach’s seminal protest album “We Insist! Max Roach’s Freedom Now Suite.”

What stands out in Abraham’s work is his adroit use of music, from R&B artist Anthony Hamilton to classical from Fredric Chopin, gospel from Cleo Kennedy and live jazz from the Robert Glasper Trio. Plus, there are his stories, connected, directly or indirectly, in part to his African-American, Pittsburg-bred background. For instance, of the many scenes and images projected on a backdrop both evenings, one is of a big Black man being seduced by a white woman from the controversial 1975 film “Mandingo.” There was also the 2014 YouTube clip of Eric Garner being placed in a chokehold by a New York City police officer that led to his death. More images, mug shots and the like kept coming, adding to the story. All the while, the nine dancers (Abraham, Matthew Baker, Winston Dynamite Brown, Tamisha Guy, Catherine Ellis Kirk, Penda N’diaye, Jeremy “Jae” Neal, Jordan Morley and Connie Shiau) of Abraham.In.Motion drew equal attention in their delivery of Abraham’s complex movement style.

Every part is integral to the result, and here we are to understand that, together, “Abraham’s choreography and Roach’s [plus the other’s] music connect ideas postured in a cross-cultural exploration of freedom and its progression from the 1960s to present day,” notes the release. “Hallowed,” danced by Guy, Kirk and Neal, presented on the evening of three works, gives pause to Abraham’s messages. With clouds in the sky as the backdrop, this absolute meditation, this trance-like exploration, is rife with honeyed, quirky and technically precise movement sequences. The three—lovely movers in their own right—move seamlessly as one.

Also on this program is “When the Wolves Came In,” in collaboration with the dancers Baker, Brown, Guy, Kirk, Morley and Siau, who appear with various wigs and bare legs to help show Abraham’s investigation into another kind of being. The evening closed with “The Getting,’” a Glasper-Abraham collaboration, and it was a hit. Glasper and Abraham go head-to-head, moving fast—very fast, with Glasper on the piano and the dancers with Abraham’s signature movement (arms and legs cutting the air or appearing from nowhere and torsos rippling). More please.

“The Watershed” promises a great deal, including “emancipation” and such, and yes, that is there, but those trained to look for Abraham movement canons must now find a place for the other parts. Abraham’s strength lies in his ability to manipulate movement sentences and movement paragraphs, but ahhhh, the book is soon to come.

There is one more week left of both programs, and neither should be missed. For more information, visit www.nyla.org.